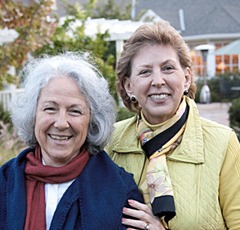 Hull and Beach are providing comfort, dignity and quality end-of-life care to terminally ill children — while considering their families’ needs — in a lively, homelike setting.

Kathy Hull, a clinical psychologist, and Barbara Beach, a pediatric oncologist, met while colleagues at Children’s Hospital & Research Center Oakland working with terminally ill children and their families. Both women had long lamented the limited options for pediatric palliative care.

Because doctors have been trained primarily to cure, rather than to provide end-of-life care, accepting the hard reality that children die is often viewed in the medical community as failure.

To address this perception, Hull and Beach wanted to provide a new model of care for terminally ill children and their families. They wanted to design “both a program and a facility that would address the need for a safe haven outside of the hospital, which we didn’t think was being filled,” say Hull and Beach.

They add: “At the time we began our plans, we didn’t realize there were no similar facilities in the United States.” In 2004, they opened George Mark Children’s House – the first free-standing, residential, pediatric palliative care center in the United States. (George Mark is named for Hull’s brothers, George and Mark, who died at the ages of 30 and 16, respectively.) The San Leandro, Calif.-based nonprofit provides respite, transitional and end-of-life care in a lively, homelike setting, thereby allowing parents the time to concentrate on being parents, instead of constant caregivers.

In the six years since opening, George Mark Children’s House has provided those services, at no cost to families, to nearly 300 children and their families.