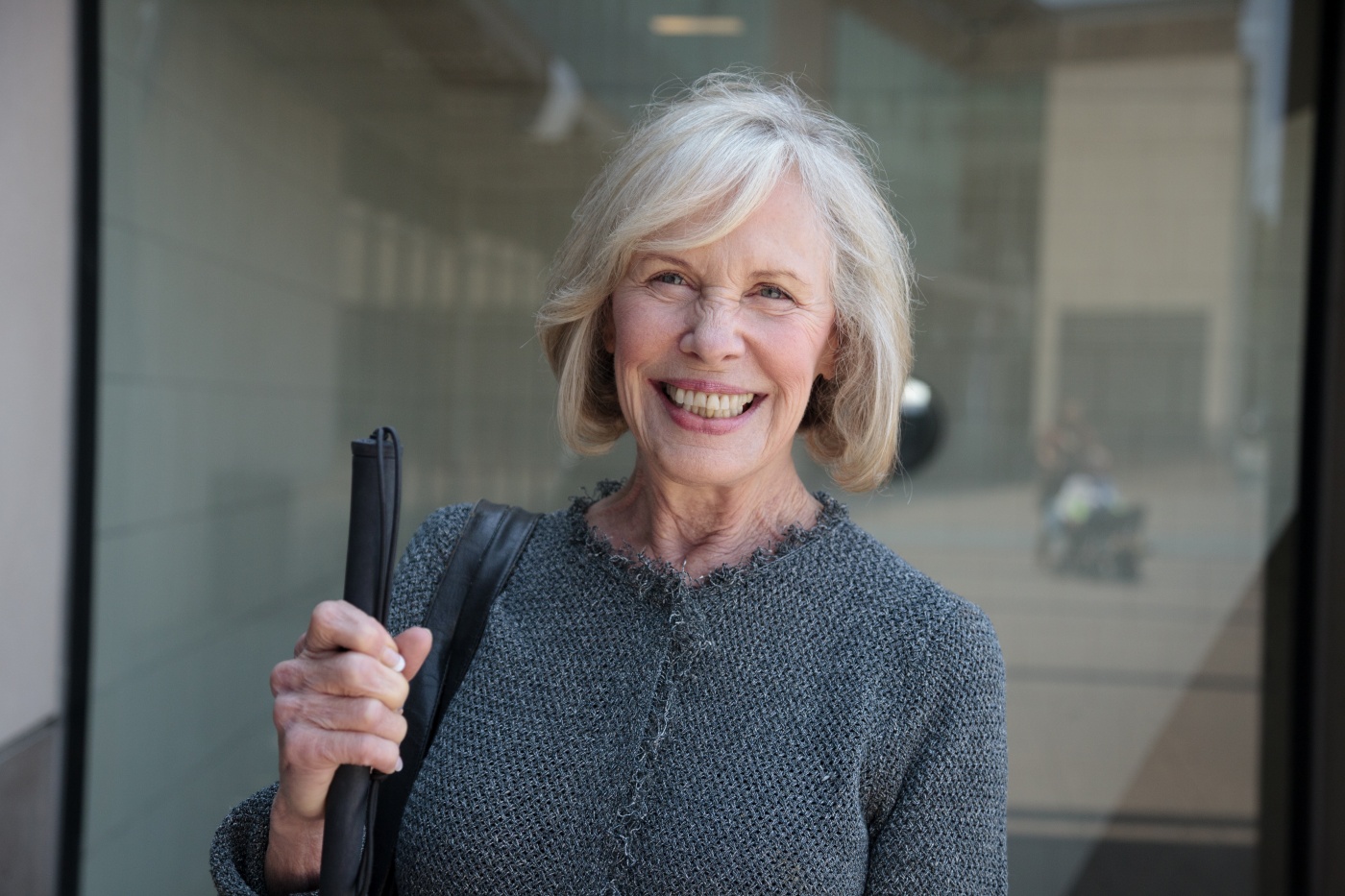 After losing her sight, she is forging a new path by helping blind people combat discrimination and find jobs.

Kate Williams spent decades as a human resources professional for top pharmaceutical and technology companies in California — and as a sighted person. But in 1989, at age 47, she began to lose her vision, due to the rare degenerative disorder Pseudoxanthoma elasticum.

As she entered her 50s, the condition progressed slowly, giving her time to adapt. But eventually, life in Southern California became untenable. Unable to drive, she could no longer commute to work. She couldn’t even grocery shop without help. So in 1997, at age 55, she made the painful decision to leave her grown children, elderly parents and siblings behind to move to San Francisco, where she could rely on public transportation to get around.

When Williams arrived in the Bay Area, she had few “blind skills”techniques for living in a world designed for the sighted — but she did have the professional experience to land a job in recruitment. Her vision continued to deteriorate, and by age 65, Williams had lost most of her vision. It was difficult to come to terms with her loss. But she wasn’t willing to give up. “I wanted to continue my independence and lead a productive life,” she says.

She found help at the California Department of Rehabilitation, which referred her to a company that provided training on adaptive technology, which converts many varieties of computer software programs into spoken language, enabling the blind to accomplish the same tasks as sighted people. “That changed my life and gave me the ability to access my computer and once again review resumes,” she says.

That’s why it was especially devastating when her career came to an abrupt end in 2009, when the company she was working for shut down. Williams was 67 and had profound vision loss. Was she employable? She thought she was. “I was somehow convinced I had much left to accomplish and enjoy. I simply could not roll over and let a meaningful life be swallowed up in sadness,” she recalls.

Instead of giving up, she launched an encore career to help people like herself. Adaptive Technology Services, the company that had provided her with adaptive technology more than a decade prior, asked her to design an employment training program for the blind. “My background in employment combined with their training techniques to the blind community appeared to be a perfect solution,” Williams says.

Within a year, the program caught the attention of the San Francisco office of the Lighthouse for the Blind and Visually Impaired, a century-old national organization. Lighthouse asked Williams to design a new employment training program for them, which they funded with $375,000 from the Obama stimulus plan.

Now 72, Williams runs the innovative Employment Immersion Program at the Lighthouse for the Blind and Visually Impaired, which trains people to pursue jobs in finance, industry, government, nonprofit and other sectors.

“Kate has created a program of seminars, interviewing role-plays and one-on-one consultation, all geared to preparing the job-seeker for what may be for some their first interview,” says Lighthouse CEO Bryan Bashin of the eight-week program. She instills each candidate with a sense of ability and self-esteem that Bashin says has resulted in a success rate approaching 40 percent, higher than most job development programs for sighted jobseekers. “Employment counseling isn’t just a job for Kate,” he adds. “It’s a calling.”

Williams has made mentoring a significant part of the program, with participants meeting other blind people like herself who’ve successfully gained employment. Katy Johnson, vice president of community relations at Wells Fargo, which recently gave the program a $30,000 workforce development grant, says, “Since Kate lost her vision as an adult, she has first-hand experience in adjusting to blindness, and finding ways to maintain her career and her confidence.”

According to Johnson, it’s this combination of personal and professional experience that has allowed Williams to come up with a whole new approach to job training that, at its core, helps blind and visually impaired people, from their 20s into their 70s, learn to master their disability and talk about it in a positive light.

This positive take didn’t come easily to Williams. In fact, on her first visit to Lighthouse, which occurred long before she developed the training program, she turned around and walked away. “It frightened me,” she recalls. “I think blindness frightens most people. I didn’t try to befriend people. I resisted it.”

Such stories are instrumental for people like Lily Liang, a 25-year-old San Francisco native who started to lose her vision in her late teens. Liang graduated in 2012 from the immersion program. Her first job was with the financial services company BlackRock, and she now works at the San Francisco Mayor’s Office. “Kate is someone who doesn’t separate her work from her life,” says Liang. “Getting more people with disabilities employed, having someone on the other side to advocate for them, and building confidence: she was a great mentor.”

Williams also seeks to educate employers about the visually impaired. “It’s rare that a company is going to willingly open the door and hire blind people,” she says, but “we don’t want to keep people in the ‘blind ghetto’ — jobs where they’re only accepting applications from the blind. We want to break that barrier and have people employed in the competitive job market.”

Williams helped one program participant, who is both deaf and blind, land a position at a company where he uses a Braille-facilitated computer to help design airplane parts for Boeing.

Such technology has vastly expanded the professional possibilities for the visually impaired, Williams says. “It’s changed the whole community.” Some of Williams’ students have even attended law school and passed the bar through the help of adaptive technology. “It’s a far cry from people standing on a corner with a tin cup,” she says.

The program also saves taxpayers money. A non-working blind person receives around $1 million, on average, in Medi-Cal support, Section 8 and other benefits. But people who are productively employed no longer need that assistance.

Thanks to 2014 federal legislation requiring increased hiring of disabled people by companies that do business with the government, Williams anticipates her program will get a whole lot busier. “Our challenge is to meet that need,” she says, and to expand services to the deaf and people with other related disabilities.

While the program is still relatively small, in the next five years Williams plans to expand her staff and develop a virtual workshop using web-based communication technology to allow offsite trainees to participate in the classroom environment. “There’s no greater joy than receiving the phone call from one of our graduates announcing they’ve accepted a job offer,” she says. “I couldn’t be more grateful, more full of joy for these people who before didn’t have a lot of hope. Their whole lives have changed.”

Williams’s commitment comes down to a spirit of achievement she’s determined to instill in others. “Our lives are what we make up our minds they’re going to be. To be where I am today, doing what I am, is against the odds,” she says of her encore career. “Had I just decided, ‘Okay, I can’t see anymore, and I can’t do anything,’ I wouldn’t be sitting here.”

In recognition of her extraordinary encore work, Kate Williams was awarded The Purpose Prize in 2014.

2015 Update: Since winning the 2014 Purpose Prize, Lighthouse has received so much attention, which translates into greater community awareness of its resources and assistance. Lighthouse has now generated $1.8 million dollars in salaries.