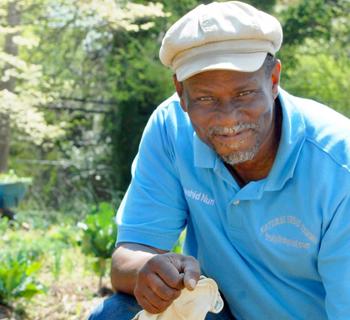 Concerned about the effects of industrial agricultural practices, Nuri works to create natural and organic urban farms, while educating the community on the importance — and enjoyment — of growing one’s own food.

Nuri, 61, worries that industrial agriculture breeds a host of problems. In his view, the industry’s practices are unsustainable; allow produce to lose nutrition during transport; lead to a scarcity of quality, fresh food in urban areas; and punish the environment by relying on fossil fuels in producing and transporting goods. To take action, in 2006 Nuri founded Truly Living Well, which consists of two entities that aim to create a local urban food economy in Atlanta based on natural and organic agricultural principles. Truly Living Well Urban Farms LLC, a for-profit organization, creates local urban farms and manages a community-supported agriculture business. Truly Living Well Center for Natural Agriculture Inc., a nonprofit, opens the farms as learning labs for students as young as 3 to older adults and supports growing fresh produce in urban areas by teaching people how to grow their own food at home – “edible landscaping.” In 2008, the combined entities worked to grow 15,000 pounds of organic food; became a training center for youth in the juvenile justice system; and hosted 500 students. Nuri focuses much of his attention on young people: “I have seen numerous instances where children who would not touch vegetables look forward to eating things they grew themselves.”