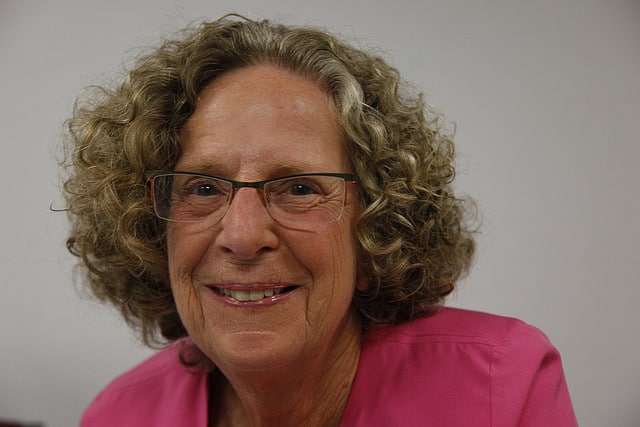 Broder, a psychiatrist, created The Soldiers Project to support free, confidential and unlimited therapy to veterans returning from Iraq and Afghanistan — and their families.

As Judith Broder watched a play documenting the mental anguish some veterans experience after coming come from war, something clicked. As a psychiatrist, she knew that without help some soldiers would never get past what they had seen and done. She also understood that a veteran’s distress can painfully affect loved ones. Taking action, Broder created an organization that supports free, confidential, unlimited therapy to service members and their families.

In a dark theater, Judith Broder experienced the darkest of emotions.

As she watched a portrayal of anguished U.S. soldiers fighting in Iraq, she felt devastated, realizing that they had “done what they had to do but couldn’t live with themselves afterwards.” The play, “The Sand Storm: Stories from the Front,” by a former Marine, was raw and powerful, and it pushed Broder, a psychiatrist, to act.

Broder created The Soldiers Project, which provides unlimited, free, confidential therapy to combat veterans. The program, unlike the U.S. Department of Veterans Affairs, also provides therapy for affected family members who request it.

The sessions aim to alleviate the behavioral problems that can result from combat trauma and address personal, moral and spiritual crises that may follow grim wartime experiences or personal actions.

The Soldiers Project recruits volunteer therapists; gives them specialized training; and encourages conversations with troubled veterans and active-duty military personnel as well as their spouses, partners, parents and other family members. Broder says the five-year-old program has a network of more than 200 volunteers, has treated more than 300 patients in the Los Angeles area, and is being replicated in other cities.

Cases are hardly simple. A 35-year-old veteran came to The Soldiers Project after a diagnosis of post-traumatic stress disorder. He couldn’t drive on his own because overpasses frightened him. He suffered from flashbacks, bursts of terror and nightmares, his volunteer therapist recalls.

The veteran’s marriage to a high school sweetheart was unraveling. Therapy ranged from dealing with memories of violence at the hands of his father to recollections of brutal firefights in Iraq and the killing of an Iraqi family, his therapist says. His central struggle was between the image of himself as “hulk” and killer and his softer self.

After many months, the volunteer says, the veteran’s post-traumatic stress disorder symptoms eased: “He brought his wife to sessions, and I saw his deep capacity to nurture, to show me and himself that he was not the monster he sometimes became.”

Although Broder, 69, knew very little about the military health system before she started The Soldiers Project, she knew enough about how people react to trauma to be convinced that with more than a million soldiers returning to their old lives – sometimes after multiple deployments – there would be a need for help.

A recent study by the RAND Center for Military Health Policy underscores the need. The study estimates that about 300,000 combat veterans who served in Afghanistan and Iraq suffer from post-traumatic stress disorder or major depression. Yet only a small percentage seeks treatment. A Pentagon task force described the military mental health system as overburdened, understaffed and inadequately financed. Last year, the suicide rate among U.S. soldiers was the highest on record; at least 192 soldiers killed themselves.

There are multiple reasons those who need help don’t get it, says Broder, who does not treat Soldiers Project patients herself. “Societal stigma against mental illness in general is a ‘suck-it-up’ mentality in the military that makes it a sign of weakness to ask for help. The VA [Department of Veterans Affairs] can be an intimidating bureaucracy and getting an appointment can involve a lot of waiting time.”

Plus, Broder says, active-duty military personnel worry that psychiatric treatment will go on their records and wreck their careers.

“This is an aspect of the human experience that isn’t adequately addressed by the Diagnostic and Statistical Manual of Mental Disorders,” says Helena Young, lead psychologist for the post-traumatic stress disorder clinical team at the VA Palo Alto Health Care System in California. “To be given space to discuss shattered assumptions about faith and belief in a just and fair world is rare. And important.”

The Soldiers Project also puts intense effort into public education about the hidden wounds of war. Broder has spoken at churches, synagogues, Rotary clubs and military family support groups – “anyone that would have me” – noting that reaching an age when she had satisfied her professional ambitions gave her the freedom to step outside her comfort zone. “Most of my career, I sat and listened. Suddenly, to publicize the project, I had to become a public speaker, and it turns out I’m pretty good at it.”

To further build momentum, Broder organized two conferences exploring mental health care; the most recent one, in May, brought together soldiers, families, VA officials and mental health professionals. And Broder is pushing to establish a presence at local community colleges, where many veterans are enrolled.

In actively reaching out to veterans and service members, the Soldiers Project fills “probably the biggest gap we have in the VA system,” says U.S. Rep. Bob Filner of California, chair of the House Committee on Veterans’ Affairs. “We wait for people to come to us.”

“When we tell soldiers and their loved ones what we have available, they are pretty astounded – and very grateful,” says psychologist Barbara Schochet, who was recruited as a volunteer in 2006 and is now The Soldiers Project’s assistant director. “We’ve helped soldiers – and their wives and girlfriends – understand that they’re reacting to having been in an abnormal situation and are not going crazy.”

One testament to The Soldiers Project’s success is its growth. Independently run satellites – for which Broder offers guidelines – are flourishing in four other California cities as well as in New York, Washington, New Jersey and Illinois. And Broder’s work with the project earned her a 2011 James Irvine Foundation Leadership Award.

“In a perfect world, there’d be one near every base,” Broder says, but she’d settle for five in the next year – as well as the ability to hire a researcher to track treatment data. “We have a reputation now, so we constantly get calls. Yesterday it was an attorney. ‘A vet beat up his wife,’ he told me. ‘She’s here with me, doesn’t want to press charges, but wants him to get treatment.'”

“The people we provide care for are our family,” she says. “They give to our country in ways that are unimaginable, and the wounds they carry are hidden and forgotten by most of the population. My passion is to be an advocate for them, to teach them and provide the care they need.”