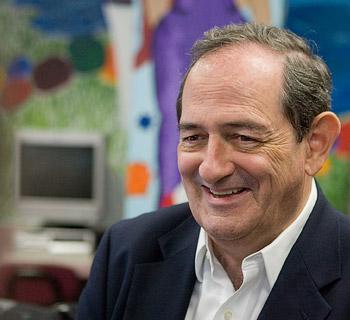 Engaging Hispanic parents in the education of their children.

High school dropout rates for Hispanic teens in Texas are three times those of whites and 30 percent higher than the rates for African Americans. Jose-Pablo Fernandez, former director of the Mexican Institute of Houston, knew he needed to try something new to improve Hispanic children’s chance of success. But what?

In 2002, Fernandez launched an effort, then called the Community Learning Centers, to raise the educational and career goals of entire Hispanic families in Houston. The 16-week, 96-hour program he created in partnership with Monterrey Tech in Mexico equips parents with marketable computer skills, while teaching them strategies to encourage their children to stay in school and go on to college. In 2002, the Alliance ran programs in six Houston schools. Today, the program, now known as the Parents Alliance, is offered in 110 schools and community centers in Houston, San Antonio and Beaumont. More than 4,200 Hispanic adults have graduated from the program, and parental involvement in the participating schools has dramatically increased.

To say that Jose-Pablo Fernandez has had a varied career is a bit of an understatement. An engineer by training, he sold construction equipment, then established a business as a photographer and publisher in his native Mexico. When he came to Houston in 1998, he opened a furniture store, which closed two years later. In 2000, he became the executive director of the Mexican Cultural Institute of Houston.

Not long after that, Fernandez learned a few tough facts about the education of Hispanic youth in his new country.
The Hispanic population is the youngest, the most rapidly growing (Hispanic children represent between 60 and 90 percent of children in Texas and California public schools) and the least educated group in America.

In Houston, one-fifth of U.S. born Hispanics and more than one-half of Hispanic immigrants have less than a high school education.

Fernandez met with experts, educators, community leaders, and parents to pinpoint the needs of the Hispanic community in Houston. He learned that parents who are involved in their children’s education can be the strongest and most positive influence on their educational achievement. In 2002, he launched a new program based on a simple proposition: To encourage Hispanic parents to be active participants in their children’s education, you first need to entice them into the schools.

Parents tended to stay away, intimidated by poor English skills and cultural differences, but Fernandez realized that he could bring them into the schools by offering a certificate from the prestigious Monterrey Technology Institute in Mexico. So, in partnership with Monterrey Tech in Mexico, he created a 16-week, 96-hour course, all in Spanish, to teach parents computer and life skills (72 hours of computer training and web design, plus 24 hours of lessons in navigating the public schools and advice about topics including domestic abuse).

Fernandez started a pilot with two schools, and then convinced the school district in Houston to offer the course in 30 schools. Since then, more then 4,100 Hispanic adults have completed the program, now offered in 110 schools and centers in eight school districts in and around Houston, Beaumont and San Antonio. Houston Independent School District, the seventh largest system in the nation, has made the program available district wide.

It’s week 15 of the 16-week Community Learning Centers Program. At the computer stations in Golfcrest Elementary School in East Houston, 14 women and two men work on Excel spreadsheets, while instructor Maria Ibarra – once a student in the program – hovers in the background ready to help.

Five years earlier, Ibarra, a Mexican immigrant, was a stay-at-home mother with no English and no job skills. Today, after completing the program and additional business courses, Ibarra earns $10 an hour using her skills to help others and hopes to soon realize her dream of starting a business. Perhaps most important, Ibarra is a role model to her three children who see firsthand the value of education.

The program has had a significant unintended – but welcome – consequence. Parents who once avoided schools because they say they often felt intimidated, couldn’t speak English, or were afraid their legal status would be questioned, have started volunteering and interacting with teachers.

“We didn’t set out to get parents volunteering in schools. We’re not that smart,” Fernandez says.

But the impact has been profound. After the predominantly Hispanic Golfcrest Elementary School introduced the program in 2003, mothers dropped their children off, attended morning classes down the corridor, and stayed around to help out. They worked in the office, helped teachers and created learning tools for students using their newly acquired skills in PowerPoint.

“The computer technology was the bait to bring the parents into the schools,” Fernandez says. “Once they were in the schools, you have the lollipop effect. They try it, and they want more.”

Parents like Patricia Cruz, a student in Ibarra’s class who has a daughter in kindergarten, are overwhelmingly pleased with the program. “I wanted to feel better about myself, and I wanted to help my daughter with her school work,” says Cruz, through an interpreter.

Fernandez acknowledges he has only scratched the surface with the Hispanic population in Houston. Still, he feels an urgency to take the program nationwide. “We developed little by little, but it’s so easy to replicate and to go national,” Fernandez says. He cites constant requests to establish the program in other cities. “We have to go big.”

Since leaving the Mexican Institute earlier this year, Fernandez set up Parents Alliance to prepare for growth. His plan is to partner with nonprofit Hispanic organizations in other cities and states and have them establish the program in schools in their communities. Fernandez says the Alliance is preparing to take the program to other cities and border towns in Texas, and to Arizona, California, New York, Florida, and Illinois.

Fernandez also wants to make the program available in English to benefit other underserved communities. And, he points out, Monterrey Technology Institute is prepared to offer hundreds of distance learning courses in Spanish and English.

The learning curve to establish the Parents Alliance has been a steep one for Fernandez. He jokes that he didn’t know what “K through 12 education” meant when he started out. But those who know him don’t doubt his passion and ability to deliver for the children and the parents.

“He soaks up whatever you have to give him, and then he takes those things and incorporates them in whatever he is creating,” says Nancy Frees Fountain, the managing director of the Houston-based Frees Foundation, which has supported the Parents Alliance. “Whatever he touches, he makes better.”