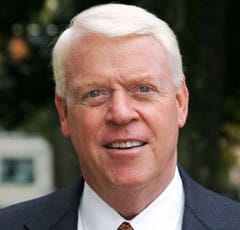 Jim Lientz Jr., a former banker, had been retired for a year when Georgia’s incoming governor called on him to become the state’s first chief operating officer. Taking the role in 2003, Lientz quickly realized that the state government had not been acting as a good steward of its resources.

The state could not report on how many properties or vehicles it owned or leased. Medicaid costs were increasing by 10 to 12 percent per year. Lines for driver’s licenses averaged roughly two hours in wait times. The majority of construction projects were late in completion and over budget. State employees were receiving inadequate training.

“There is absolutely no reason that government cannot and should not function with a high level of responsiveness and accountability to its customers,” Lientz says.

So he got to work, installing accounting and properties officers. Financial audits are now completed in half the time, and there is now a public website mapping all state-owned properties. Medicaid approval went from nine weeks to 12 days and once-skyrocketing costs have been contained, with savings estimated at $2 billion over the past four years. Waiting time for a driver’s license went from hours in some locations to less than 10 minutes. And, Lientz helped establish a governor’s leadership academy, which provides executive leadership training and identifies pressing issues in government operations.

Lientz, who left his government position in the summer of 2010, is now coaching and mentoring leaders in the public and private sectors.