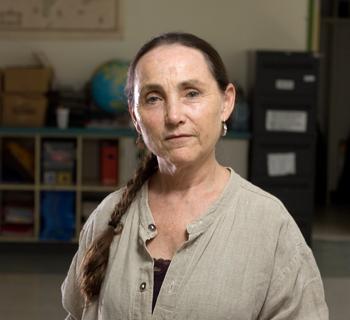 A professional media consultant, Jane Wholey had long been frustrated by New Orleans’ dismal school system, where 75 percent of 8th graders scored “below basic” in English and ten superintendents had passed through in ten years. In the wake of Hurricane Katrina, Wholey interviewed middle-school children back in town after a year’s displacement who spoke in awe of amenities in good schools elsewhere. Wholey founded Kids Rethink New Orleans Schools to publicize their stories and generate action to rebuild a better New Orleans school system. Wholey saw that children’s innocent amazement at schools with clean toilets could get media attention and shame officials into action. In 2006, at age 59, she formed Rethink, a collaboration of planners, architects, artists, educators and media experts, to help marginalized youth lead the city in ‘rethinking’ public schools. The children told a news conference that schools they had attended outside New Orleans had enough chairs for everyone to sit simultaneously; libraries with books; and lockers. Then they described what the schools of their dreams would be like. Media publicized the students’ innocent yet hard-hitting presentation, and busy professionals in different disciplines were inspired to work together across race and culture. The superintendent responded by repairing 300 school bathrooms and committed to opening Rethink Clubs in all 23 of the elementary and middle schools. “I will own up to some deep fears about taking on this job. But in the end, my rationale is simple: Why not?”