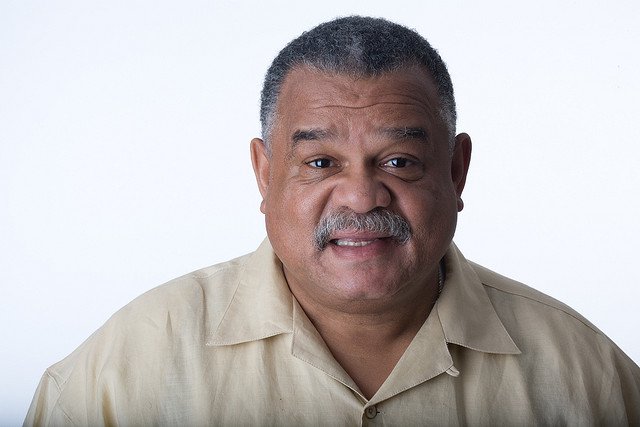 Nonprofit Director
The Choice Is Yours
Purpose Prize Winner 2009

Formerly homeless and addicted to drugs, James is now fulfilling a promise to help others stay off the streets.

James Smallwood was homeless, drug-addicted, and bug-infested. Knowing he might die on the streets, he got himself into a rehabilitation center and promised God that he if got clean, he would help others. Smallwood beat his cocaine dependency and is now fulfilling his vow through a nonprofit he created to serve ex-convicts, drug addicts, and the homeless in Philadelphia and Camden, New Jersey. The organization trains program participants for work in the construction trades, while helping them with reading, math, and job-hunting skills.

The young man’s angry outburst was sudden and unexpected. So was the .38 revolver in his hand. No one was supposed to bring a weapon to carpentry class. “They told me I was nothing. They told me I could never be you,” he shouted, pressing the barrel against James Smallwood’s throat. “So I’m going to take you out.”

This confounding logic – I’d like to be you, so I have to kill you – didn’t faze Smallwood. He had known such dark confusion as a cocaine dealer and, eventually, a hard-core user. In the 1980s, he became homeless, sleeping in an abandoned house and eating out of restaurant dumpsters. When he finally got to a drug rehabilitation center, the staff had to hose bugs off him and burn his clothes.

The young man with the gun, which he was convinced to drop, was a student in the free 13-week training program in carpentry, plumbing, and other skills offered by The Choice is Yours, a nonprofit Smallwood founded in 1997.

The organization offers free training, case management, and job placement in Philadelphia and Camden, New Jersey, to ex-convicts, drug addicts, and the homeless. Smallwood says some 600 graduates have gone on to gainful employment in the trades, and 82 percent have stayed employed throughout the two years the organization tracks their cases.

Smallwood founded The Choice is Yours to make good on the promise he made to God the day the rehab center accepted him. “If I make it through recovery,” he told himself, “I’ll never do drugs again, and I’ll devote my life to helping others.”

While having a gun pulled on him is rare, bleak stories are all too common. “The kind of business I’m in, you must love what you do, because there’s a lot of heartache,” he says.

Smallwood sees now how his own life went awry. Athletic and academic success in high school put the Philadelphia native on track for a Princeton scholarship, but he had to pass up the chance after his father died and Smallwood had to support his mother and brother. A stint as a sales manager of a Lincoln Mercury dealership ended with the gas crisis of the 1970s.

By then a father of two daughters, Smallwood worked in construction for the next decade, falling into drug dealing and an “overwhelmingly destructive addiction to cocaine.” In 1989, he got clean and has been clean since.

Five years later, Smallwood started giving motivational speeches at schools and community centers. Someone suggested he formalize his operation as a nonprofit. And so The Choice Is Yours was born. The phrase struck him, he says, because “we all have choices in life. I made bad choices. We can make bad choices, but we can still make good ones.”

In that vein, Smallwood saw promise in a group of single mothers in Camden who had bought run-down houses on the cheap. “The women were prostituting themselves with contractors to get the plumbing fixed,” Smallwood says. With a $5,000 grant, he taught the women basic plumbing and carpentry skills so they could do the repairs themselves.

That experience was the inspiration for the 13-week course. Today the course runs whenever Smallwood gets the funding for it – generally three or four times a year. Classes run five nights a week and focus on math and reading skills, GED prep, resume assistance, and hands-on trades training. Sometimes students learn on site at a home restoration being done by Smallwood’s for-profit company, JES Construction. (He also runs another for-profit entity, Innerbridges Technology, which trains teenagers and young adults how to operate video and camera equipment.)

The classes are held in conference rooms on the ground floor of the high-rise office building near the Camden waterfront. The Choice is Yours has operated from that high-rise for the past three years.

Stephan Pitts, who took the course in 2007 to learn more plumbing skills, was skeptical of anything free. He had taken other such training programs before, but classes had been canceled, organizations went belly up, and promised job leads failed to materialize.

“We had a professor from Temple University teach us math all the way from decimeters to how to get a CD (certificate of deposit) at a bank,” Pitts remembers. “These people were really trying to help us out.”

Today Pitts is in charge of 18 employees as a project manager for Service Group Inc., specializing in security on the PATCO High Speed Line. Smallwood recommended him for the job.

The Choice is Yours regularly reroutes students who get partially through the program and decide they don’t like construction. The organization has relationships with various training centers, from trucking schools to beauty schools. Often these institutions will waive the fee for Smallwood’s students.

After setting up his program in Philadelphia, Smallwood saw great need in Camden. This city of 80,000 is the second poorest in the country. A third of its citizens live below the poverty level. Roughly 11 percent of homes are vacant. City government officials have been so inept and corrupt – three of six recent mayors have been found guilty of mismanaging funds – that the state took over Camden’s finances in 2002.

Smallwood set up shop at Camden’s West Jersey Hospital about seven years ago. Even more than in Philadelphia, “this is where the crime is and the drugs are,” he says, where people have given up on life.

Smallwood understands hopelessness. “The heartache, the hardship, the hunger, the not eating, the not bathing, becoming accustomed to having nothing, to people telling you that you’ll never be anything, that you’ll never accomplish anything in life. But the people who come in here, no matter how they come in here, they start to see, ‘Hey, this guy cares about me.'”

In his 60s, Smallwood is looking to expand operations nationally. He hopes to add a green building component to the program. His organization is negotiating with an Israeli manufacturer of solar panels and windmill technology. The company wants The Choice is Yours to train its students to install its solar panels in the United States.

Whatever happens in the future, Smallwood draws strength from the people he has already helped. The young man who held that gun to Smallwood’s head graduated last December. For the graduation ceremony, he was decked out in a shirt and tie, a huge smile on his face.