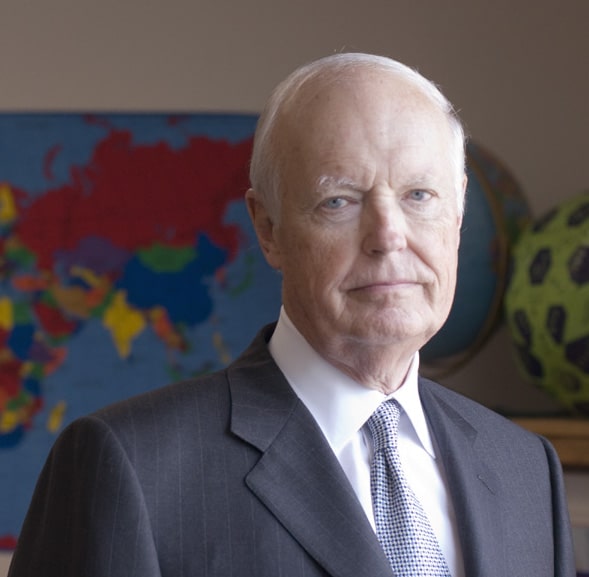 Ketelsen created Project GRAD (Graduation Really Achieves Dreams) when he was CEO of Tenneco, a Fortune 500 manufacturer of heavy equipment, in 1988. When he retired, he turned his full attention to doing more to help minority and low-income youth graduate from high school and attend college. Early efforts focused on tutoring and summer jobs, but Ketelsen wasn’t satisfied with the return.

Today Project GRAD includes college scholarships; rigorous new K-12 reading and math curricula; teacher training in classroom management; and a partnership with Communities in Schools, a nonprofit that coordinates school-based community resources. To date, 135,000 students in eight states have been served by Project GRAD; 1,707 GRAD scholars are attending college; 14,500 GRAD students are in high school and plan to go to college; and the high school graduation rate for GRAD participants is nearly double pre-program rates.

Ketelson’s success is evident.  Susana Escobedo is looking forward to a bright future as an engineer. The 17-year-old Jefferson Davis High School senior is headed to the University of Texas in Austin in the fall. The daughter of immigrants and the first in her family to go to college, Escobedo says college would have likely been impossible without Project GRAD.

“I think I’d be on a different track because my family is low income. Project GRAD has helped me a lot,” she says.

Another senior, 18-year-old Rodolfo Reyes, began working with Project GRAD in middle school. “Not only has Project GRAD helped me stay in school, it has motivated me to want to go to college,” says Reyes. “I’ve heard that phrase ‘one person can make a difference,’ and Mr. Ketelsen has proven that by coming up with the idea for Project GRAD.”

James Ketelsen is well-known in Houston for his business career — 14 years as chair and CEO of Tenneco Inc. But in the years since he retired he’s built a national reputation for Project GRAD (Graduation Really Achieves Dreams), a nonprofit that works to help disadvantaged youth — overwhelmingly minority and low-income students — graduate from high school and attend college.

In the early days, Project GRAD created a few strategic interventions for high school students, including tutoring and summer jobs. Today, Project GRAD is a comprehensive program for improving K-12 education that includes rigorous curricula for math and reading, teacher training in classroom management, a college scholarship for high school graduates, and a partnership with Communities in Schools, a nonprofit that coordinates school-based community resources.

The results are compelling. The high school graduation rate for GRAD participants is nearly double pre-program rates. More than 4,300 students have received Project GRAD college scholarships to date. And while 1,707 GRAD scholars are currently attending college, there are 14,500 high school students in the Project GRAD pipeline now with a stated commitment to continue their educations.

“I was convinced early on, when I was still in business, that inner-city education really needed to be solved in this country if we were going to be successful in the future,” Ketelsen says. “So while I was still running Tenneco, we adopted Jeff Davis High School — this was back in 1981. We put mentors and tutors in the school. We provided, located, and paid for summer jobs for these kids. And then we put Communities in Schools there, with social workers to assist the kids with their external problems,” Ketelsen says.

After that first year, Ketelsen didn’t see the results he wanted, so he went back to the drawing board and made adjustments to his plan.

“I felt like we needed to find something else. I said, what about this gentleman that had promised kids in Boston a scholarship to college if they graduated from high school? Let’s put a scholarship program in to see how that works,” he explains.

“So we did that with the ninth graders in 1988-89. I told them if they would take college prep courses, maintain a 2.5 grade point average, graduate in four years, and attend two summer institutes at universities, we’d provide a $4000 scholarship — $1000 a year toward their education. And that worked in terms of increasing the number of kids that went to college,” Ketelsen recalls.

The high school, which serves primarily Hispanic students and graduates about 175 seniors a year, saw a spike in college enrollment — from about 20 to 81 in the first year of the scholarship program.

Still, Ketelsen wasn’t satisfied. “The thing that bothered me was that we were still losing the same percentage of kids as dropouts, we weren’t reaching the bottom part of the spectrum at all,” he says.

Once again, Ketelsen went back to the drawing board. But this time, he also retired from Tenneco in 1992 and began developing Project GRAD.

“I had watched other executives who had retired and they’d sign up with six different organizations to do this and that. And they would sort of run around with a lot of work, but they weren’t accomplishing a lot and as far as I could tell they weren’t getting a lot of joy out of it, so I decided to just concentrate on education,” Ketelsen explains.

So Ketelsen adopted a long view, starting in elementary schools and adding new components focused on improving reading, math, and student behavior. And he began to expand, first to Houston, and then to other cities around the country. Funding came from government grants, school systems, corporate sponsors, foundations, and individuals.

Like most non-profit CEOs, Ketelsen spends a large percentage of his time raising money, for both sustainability and growth. That’s gotten a little more difficult lately, as Congress has cut back on federal earmarks.

On the local side, Project GRAD has encountered some difficulties with the Houston Independent School District. While the system acknowledges that Project GRAD schools do a better job of getting low-income students to graduate from high school and enroll in college, one of the Project GRAD schools showed up on a list of failing schools this year. The district plans to reduce funding.

Ketelsen is frustrated, particularly because the school, Sam Houston High, has only been a Project GRAD school for a short time. While the scholarship portion has been successful, none of the students have benefited from the elementary program. But he is hardly daunted, and he’s not losing his focus on the big picture. In coming years, he hopes to expand Project GRAD to reach 270,000 at-risk kids.

“Seventy-five percent of the children in the city of Houston are either Hispanic or African American. If we’re going to have a workforce in the future, that 75 percent is going to be a significant part of that workforce and we’ve got to educate them adequately. If we do a good job, then we’ll have a good workforce for the future and these kids will be productive in our society and good citizens. We can’t have a democracy with an illiterate voting population.”