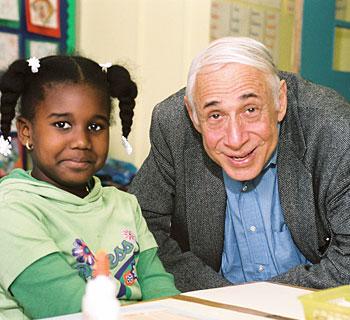 A long-time social innovator working behind the scenes on a wide variety of issues, Herb Sturz works to help one population while helping another – what he calls “double or triple social utility.” Most recently, Sturz has focused on two big problems – the lack of quality after-school care for children and the lack of opportunities for older adults to use their experience for the greater good.

Retirees like Gloria Spagnoli, who loved her job as a social worker, but retired because she could no longer deal with the stresses of a 9-to-5 workday. Still, she had some regrets

“I’d built this body of knowledge and experience over many years,” says Spagnoli, now 68, “and I thought what a shame it would be to just give it up, especially when I’m still young enough to put it to use.”

Spagnoli searched for traditional volunteer positions but couldn’t find any that would put her specific skills to use. “I wasn’t interested in tutoring children or sitting in a hospital and reading to people,” she says. “I wanted to continue to apply my social work skills, just not on a full-time basis.”

Sturz hopes the program — which differs from run-of-the mill volunteer work by paying participants a $10/hour stipend — will bring some meaning into retired people’s lives. “These individuals still have a lot to teach and contribute, and they aren’t satisfied just sitting around until they die,” he says. “They want to live until they die.”

Spagnoli is living — and loving her new part-time job. Thanks to ReServe, she was hired by Goddard Riverside Community Center to counsel seniors about their Medicare D coverage. Now she now spends ten hours a week helping others at Goddard with everything from applying for food stamps and disability coverage to providing mental health support.

ReServe has started small; to date, the organization has only placed 37 people in 16 organizations across New York City. But that’s how Sturz works. By carefully building the foundation, the supporting relationships, and the partnerships a nonprofit needs to thrive, his projects tend to snowball to success.

Sturz, a trustee of the Open Society Institute in New York, has a long, accomplished history as a social innovator, helping to create more than 20 still-thriving New York-based nonprofit organizations. His initiatives have tackled a wide variety of social issues, from criminal justice reform (The Vera Institute of Justice; The Center for Court Innovation), to affordable housing for the homeless (Project Renewal), to support for victims of abuse (Safe Horizon).

Sturz is also known for trying to help one population while helping another — what he calls “double or triple social utility” — and he’s put it to use when creating many of his social endeavors. “I’m always looking for synergy, for a way to solve a number of problems with one solution,” he explains. Take The After School Corporation, for example. In 1998, Sturz had the idea to create an umbrella nonprofit group that would help universalize the quality of after-school programs. Such programs, Sturz says, help eliminate crime by keeping kids off the streets, help working parents find proper supervision for their kids, and provide kids with much-needed exercise, nutritional snacks, and intellectual stimulation beyond the school day.

To make the idea reality, Sturz asked George Soros, founder and chair of the Open Society Institute, to make a five-year challenge grant of $125 million. “I wanted to make this to be a seminal thing, something to last for the long-term,” Sturz says. “He and I both knew that just helping limited groups wasn’t going to do it.”

The strategy worked. In the past eight years, The After-School Corporation has managed to match the $125 million with more than $375 million in public and private funds, growing from 25 programs to 250 programs that serve 40,000 children.

In 1999, Sturz helped create the Afterschool Alliance, an advocacy group that raises awareness about the importance of making quality, affordable programs available to all children. The Alliance currently includes 163 mayors, 106 police chiefs, and 63 prosecutors, along with many social service agencies and major corporations. Sturz continues to build connections and get more and more national leaders on board.

“We’re talking with people and sending things out to groups all over the country every day,” he says. “Our goal is to make quality universal after-school programs available to all kids by 2010. But even if we only have 70 to 80 percent by 2010, that would be okay because when we started it was entirely dependent on the private sector. While these programs need to be primed with private funds initially, in the end, the name of this game is public dollars.”

To that end, last March Sturz helped put together Afterschool Congressional Caucuses in both the Senate and the House of Representatives. So far, 31 Senators and 51 U.S. Representatives have joined the respective caucuses, which work to build support and increase resources for after-school programs.

Sturz speaks of three early incidents that made a big impact on his life. As a boy, he was an active athlete; he loved playing tennis and running track. But at age 16, he was struck with polio. “I became very sick and I think it made me more serious at a much earlier age,” says Sturz, who still lives with some loss of muscle control in his hands. “I told myself that if I live through it, I wanted to do something meaningful with my life.”

Second, on a whim, Sturz sent a paper on The Grapes of Wrath he’d written in graduate school to the famous author. “Steinbeck sent me back an extraordinary letter, three pages long, on yellow-lined paper, all about what it meant to be a writer, about taking criticism, and about how by what I wrote he could see I understood the inner chapters of his novel,” says Sturz. “It was the first time anyone ever really took me seriously. It gave me incredible confidence that I really could do anything I put my mind to.”

And third, while vacationing in Paris about 35 years ago, looking for something to read that wasn’t in French, he read The Coming of Age by French existentialist philosopher Simone De Beauvoir.

The book — which discusses the mistreatment of older people in society and the loneliness with which they sometimes struggle — inspired him. “It was the first time I thought seriously about the problems of aging people,” says Sturz, now 76. “What struck me in the book was the poignancy of what it was to grow older, to lose friends and access, to face ageism. I decided then that I’d try to do something about it.”

So, years ago, Sturz created the first of many programs geard to helping older people, EasyRide, which hired rehabilitated former drug addicts and prisoners to visit with and provide transport for older people with mobility issues. “Most of the older people were white, aging Jewish women, and most of the drivers were black or Latino,” he recalls. “In the beginning, both populations were nervous about the other, but what happened rather quickly is that they developed wonderful relationships. They each finally had someone to take care of and to take care of them.”

Sturz is hoping for that kind of synergy with ReServe. The need is evident — 100 people are waiting for placement, and applications continue to roll in weekly. But the jobs aren’t there yet, at least not in big numbers.

Sturz is on it. Having served as deputy mayor for criminal justice under Mayor Ed Koch from 1978 to 1979 and as chairman of the City Planning Commission from 1980 to 1986, Sturz is using his connections to bend some public sector ears. Pilot programs using ReServists within New York’s Department of Health and Department of Aging are already in the works, he says, and the Department of Consumer Affairs has expressed interest in possibly using ReServists as undercover shoppers.

Within five years, Sturz hopes that ReServe will become a model for other cities, and that one day it will become part of national policy. He knows, of course, that nonprofits today have to prove they can makes a quantifiable difference before attracting major resources for growth. To that end, Sturz has already talked with the Manpower Demonstration Research Corporation, which tests social policy initiatives, about measuring the program’s impact later next year.

But despite his accomplishments, Sturz remains incredibly modest, preferring to let others take the credit. He’s not totally selfless, he admits, just strategic.

“If you’re the police commissioner or a presiding justice, it’s your police department, it’s your court; you don’t want some guy from a private foundation coming in and saying publicly that X initiative was his idea and that it couldn’t have been done without his help. You want the credit,” explains Sturz. “A politician, a mayor — they need the credit. I certainly don’t need it.”