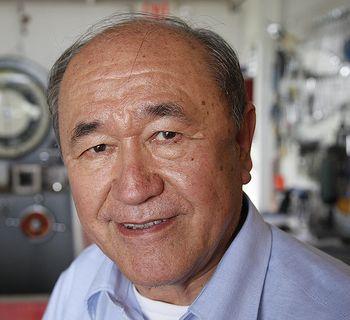 Liu found a way to transform fly ash — a toxic byproduct of burning coal — into bricks that look and function like the ones made of clay. “Green” bricks are now in production in 11 countries.

Henry Liu turned poison into possibility. The former engineering professor found a way to transform fly ash – a toxic byproduct of burning coal – into bricks that look and function like the old standards made of clay. The innovation not only removes a harmful substance from the environment, but the related manufacturing process requires less energy, is cheaper, and doesn’t contribute to air pollution or global warming. The bricks have been licensed for production in 11 countries.

A Chinese immigrant, Henry Liu said his deep gratitude for his adopted country motivated him to pay America back in the way he knew best – by inventing new ways to clean up her land, water, and air.

Liu – an inventor, a retired professor of engineering, and an entrepreneur – was working to develop and market new ways to save energy and money, improve public health, and curb global warming. His most notable invention was an environmentally safe brick made from the waste produced by coal-fired power plants.

A little background from the National Science Foundation: Each year, roughly 25 million tons of fly ash from coal-fired power plants are recycled, generally as additives in building materials such as concrete, but 45 million tons go to waste. Fly ash bricks both find a use for some of that waste and counter the environmental impact from the manufacture of standard bricks.

Once finished, the bricks look, feel, and function like clay bricks you would see on houses, banks, or other buildings.

Liu, who lived in Columbia, Missouri, wasn’t the first person to investigate the idea of putting fly ash into bricks, but in his late sixties he came up with a production method that made the bricks commercially viable. The technology has been licensed for production and commercial use to companies in 11 nations worldwide, including the United States, China, and India.

It will likely take a few more years before those companies start using the bricks, but Liu expected that in 10 years, half of the all bricks manufactured and used each year in this country will be fly ash bricks.

The potential for energy savings and pollution reduction brought Liu international recognition, and yet Liu still credited his accomplishments largely to luck and solid family values.

He grew up in the chaos of wartime China, but, thankfully, his family remained safe. When Liu was 10, his father, a meteorologist, presented him with books about radar and how to build radios. Even though the texts were beyond Liu’s comprehension, they sparked his interest. In 1963, Liu traveled to the United States from Taiwan to accept an engineering scholarship.

After college, Liu built a traditional academic career, working for 35 years as an engineering professor at the University of Missouri, inventing in his spare time. Ten years ago, Liu took an early retirement and devoted himself full-time to making his inventions (he already held six patents by that time) commercially viable. In 2001, Liu spent a big chunk of his own money to start the for-profit Freight Pipeline Company.

Liu could have stepped back from a prestigious and successful career to pursue his other interests – ballroom dancing, waterskiing, and spending time with his family.

“Instead, he works harder today than ever before,” said Liu’s son Jeffrey, shortly before his father’s untimely death. “He’s always wanted to change the world. Success to my dad isn’t about making money. It’s about leaving the world a better place.”

To that end, Liu was hard at work on his next big idea, which promised to lessen noise and air pollution, decongest highways, and reduce accidents. Capsule pipeline technology, about which Liu wrote a seminal textbook, is the transportation of solids or freight not in trucks or trains or ocean freighters but through large underground pipelines filled with air or water.

Imagine wheeled capsules, about the size of small boxcars, carrying cargo through large diameter tubes, or pipelines, underground. It’s no longer science fiction, thanks to an electromagnetic pump invented by Liu and three of his former colleagues at the University of Missouri.

O’Connor told of Liu traveling to Washington, D.C., with a miniature capsule pipeline system in a suitcase to show the technology to officials at the U.S. Department of Energy. Liu’s presentation was a success. In 1990, the NSF funded his Capsule Pipeline Research Center at the University of Missouri, the country’s only such center.

Although Liu had converted skeptics of the technical and financial feasibility of pipeline freight transport, the technology still had not received the recognition that green bricks had. Liu was, of course, working to change that.

In his spare time, he was working on his third major research interest: biomass tablets, which turn agricultural and yard waste into solid or liquid fuel.

“Most other men of my age are enjoying their retirement lives,” said Liu. “I enjoy, on the other hand, continued work. Both kinds of life bring enjoyment, but I believe that my encore career life is more fulfilling.”

Liu’s son Jerry, who holds a degree in mechanical engineering and is the CEO of Freight Pipeline Company, plans to honor his father’s legacy by continuing his important work.