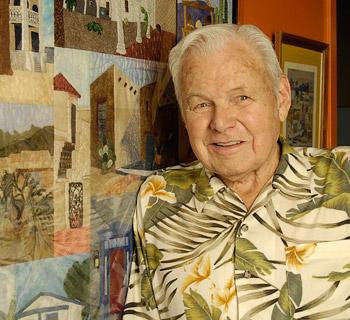 Accelerating student achievement by integrating art in the curriculum.

H. Eugene Jones, a decorated World War II fighter pilot, built his post-war career by turning failing businesses into profitable corporations. In 1999, at the age of 84, he turned his attention to the next generation. Combining his business savvy and love of music with his passion for education, Jones created Opening Minds through the Arts.

Project Zero researchers at Harvard have selected the program for inclusion in an upcoming report, Excellence in Arts Education and How to Achieve It. Started in three schools, Opening Minds through the Arts now operates in 36 schools, involving 17,000 students and 650 teachers in Tucson’s largest public school district. Jones is working to bring the program to other cities in Arizona.

Over the past few decades, professional educators across the country have been systematically dropping the arts from K-12 curricula to save money and allow more time for reading and math. H. Eugene “Gene” Jones has shown, with 17,000 public school students in Tucson, Arizona, that systematically adding art can boost standardized test scores across all subjects, for all students.

Jones’s program, Opening Minds through the Arts, incorporates music and the arts into every aspect of the curriculum – math, science, social studies and language arts – every day. It’s built on a wealth of research on brain development and multiple intelligences and allows children to process information in different ways for greater understanding on multiple levels.

The curriculum is aligned to the neurological development of children at each grade level. Fourth graders, for example, receive violin instruction to improve abstract reasoning and spatial intelligence. Kindergarteners improve aural acuity – and, ultimately, language acquisition – by listening to an instrumental trio. Second graders learn critical thinking and problem-solving skills by working with dancers, also known as “creative movement specialists.”

The results have been astounding:

“You sit on a shelf waiting for the billions of years that this earth has been in existence, and you have your turn on stage for a nanosecond,” he says. “To waste it by doing nothing is unthinkable.”

A life-long music lover, Jones attended an American Symphony Orchestra League conference in 1999, at the age of 84. At the last minute, he popped into a seminar about a program in North Carolina that used music to enhance core subjects and produced significant improvements in standardized test scores.

“It was almost as though it was predestined,” says Jones. “I came out of the room feeling 10 feet tall. I said, ‘If that is what music can do, we will do it in Tucson.'”

With help from educators, parents, arts organizations, artists and businesses in Tucson, Jones created Opening Minds through the Arts. In the 1999-2000 school year, he introduced the program at three pilot schools. Buoyed by early success, the program has grown each year since. Today it serves 17,000 children – 60 percent of them from low-income families and two-thirds children of color – in 36 public schools in the city’s largest public school district – the second largest in the state.

Opening Minds’ comprehensive plan transforms the learning environment and individual lives, explains Joan Ashcraft, director of the school system’s Fine and Performing Arts Department. “Gene’s dream is to give children hope and something to connect with throughout their lives. The older kids get, the harder it is for them to feel connected in school,” Ashcraft says. “The arts offer a connection that helps them stay motivated and keeps them in school.”

When Opening Minds came to his school, Matthew Vera was a fourth grader whose parents were addicted to drugs. Today he’s getting ready to start his junior year in high school. Now in a foster home, Vera says that the violin Opening Minds provided helped him discover a talent that changed his life.

“Music gave me more confidence. I didn’t really think I was good at anything until I started playing. Now it’s my life,” says the 16-year-old. “I live, breathe and sleep music.”

Vera says music has helped him with calculus, science and French, while also giving him an opportunity to perpetuate the cycle of giving in the community.

“It is important to give back; you can’t just take,” he says. “There are other kids who are in need and can’t afford lessons, so I give them lessons for free.”

Second and third grade OMA students Justyn and Kira Zeider are immersed in the arts. They’ve learned fractions through musical notes, implemented creative movement in the study of various science concepts, incorporated visual arts in social studies’ topics such as ancient Greece, and integrated language and oral presentation skills in the study of musicians such as Beethoven.

“Music makes me learn more. It’s because we want to, not because we have to,” says Justyn, 7, who particularly enjoys dancing and singing in conjunction with studies of liquids and solids and the weather cycle.

Adds his nine-year-old sister: “We take what we learn from music and things we learn in the classroom, and I compare them in my brain, and I put them together and I learn more.”

Both children have been involved in Opening Minds since kindergarten and say that music, which is also piped through the hallways of many participating schools, improves the overall atmosphere.

“When people hear music, they get in a better mood: People get happy,” Kira says. “It boosts up their emotions and makes them feel better.”

Feeling better is evidently having an impact on other kids, too. In most schools using the Opening Minds curriculum, attendance and parental involvement are up; office referrals for discipline issues are down.

The success of Opening Minds has led to investment – close to $5 million from the U.S. Department of Education and over $2 million in gifts from private foundations and from Jones. The next step: expansion beyond Tucson. Jones and OMA staff have been consulting with districts throughout Arizona for over a year. They have also toured with the U.S. Department of Education to bring this project to the attention of other states.

“Our country’s education system is in trouble,” Jones observes. “We have to turn it around, and the arts are a way to do that. I think Opening Minds has the potential to make a difference in what is happening in the world.”