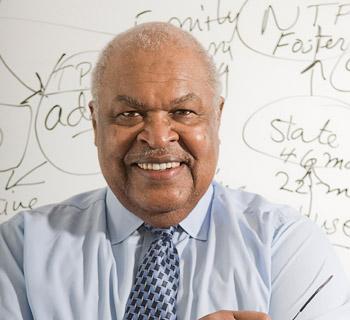 Developing programs to prevent the separation of siblings in foster care.

Gordon Johnson remembers well the day in his teenage years when his father took in two nieces and two nephews whose father couldn’t raise them. The upheaval and evident lack of concern by state case workers sparked a lifelong commitment to care for abused and neglected children. For more than 20 years, Johnson led statewide public foster care programs, seeing time and again the trauma of children being taken from their homes, often compounded by the distressing separation of siblings.

In 1998, Johnson, took matters in his own hands, moved to Florida and started Neighbor To Family, a private nonprofit foster care agency for children that focuses on keeping siblings together in foster care. In addition, Neighbor To Family has pioneered several other innovative strategies outside the confines of traditional state-run programs. Foster parents become stable employees of the nonprofit, held to a higher standard of accountability and paid a modest salary and benefits. And supportive teams – of biological and foster parents, therapists and caseworkers – are assigned to each child to work out the best long-term strategy. Over the years, Neighbor To Family has helped 2,500 children, 1,800 of whom have been siblings. These children have spent 75 percent less time in foster homes than children in state-run programs. In recent years, Neighbor To Family has opened similar programs in four states – Georgia, North Carolina, Maryland and Virginia.

In a nearly 50-year career protecting abused and neglected children, Gordon Johnson has seen the trauma of families torn apart, compounded by a system of care that too often makes things worse.

On his first job in 1959, as a cottage director at the Jamesburg State Home for Boys in New Jersey, Johnson remembers seeing youngsters in hand and leg cuffs being beaten by the officers entrusted to care for them. He remembers in Illinois the feeling that he was placing neglected children in “some worse places than where they came from.” And he remembers the tearful separations of siblings entering foster care.

“They are taken from home. They don’t know what’s going on. The only people they know or have any contact with are taken from them, and they don’t see each other for long periods of time.”

Johnson saw what was broken. In many ways, traditional foster parents ran the old-style system. Because they were volunteers, they had the ability to reject placements, including additional siblings. But even when he was the chief of Illinois’s massive Department of Child and Family Services, Johnson knew the only way he could really change the traditional foster care system was to walk away from it.

So, in 1998 with the support of his wife Deloris, Johnson started Neighbor To Family, a nonprofit foster care agency in Daytona Beach, Florida, that focuses on keeping siblings together in foster care, while providing quality, comprehensive care. Johnson’s central innovation: to “professionalize” the foster parents – pay them a salary and benefits in return for full-time parenting and accountability.

Since then Neighbor To Family has helped 4,500 children, 4,100 of whom have been siblings. The results are stunning. Johnson reversed the national pattern of 80-90 percent turnover among foster parents. In his program, 85 percent of the foster parents stay in the program. Children are reunited with their birth fathers more than 70 percent of the time. And their length of stay in foster care is one-quarter that of children in traditional state-run programs.

Neighbor To Family has opened shop in four other states. But there are more than 500,000 foster kids in the United States, most with siblings, who need help.

Like Roland Thomas’s kids. A single father, Thomas was forced to put his four children in foster care while he was battling drug addiction in 2004. At first, the children were split into three different homes.

Neighbor To Family intervened. They placed all four children under one roof with foster parents who are employees of the nonprofit, held to a higher standard of accountability than traditional foster parents and paid a modest salary and benefits. They assigned a support team of caseworkers and therapists to help. They offered Thomas parenting classes and counseling. They helped him find a place to live and get his driver’s license back. They made sure the kids were healthy and in school.

Neighbor To Family works to keep everyone in the loop with the goal of achieving quicker and longer lasting family reunification. It doesn’t always work out, but in Thomas’s case, the family was reunited after a year, and they’re still together.

The average length of stay in foster care for Neighbor To Family children is 7.2 months compared with a national average of 32 months, according to University of Central Florida Social Work Professor Sophia Dziegielewski.

A 2003 report by the Ounce of Prevention Fund of Florida found 94 percent of children under Neighbor To Family’s care were either reunited with their parents within 12 months or had an alternative permanency plan.

Johnson first came in contact with the concept of foster care in his teens, when the mother of two of his two nephews and two nieces died. Their father was an alcoholic and unable to care for them. Johnson’s father took the four children in.

Johnson remembers state workers showing little or no interest in their welfare. “Occasionally a worker would come into our home to check on them and all they would say is, ‘Here’s a clothing voucher.’ They weren’t concerned about anything else,” Johnson says.

The family upheaval sparked a lifelong passion in Johnson to care for abused and neglected children. He worked in state-run programs in Pennsylvania, New York, and Illinois. In 1990, he left his job as chief of the Illinois Department of Child and Family Services and became President and CEO of the Jane Addams Hull House Association, a nationally recognized nonprofit social service agency in Chicago.

There Johnson was given the support and freedom to implement a new model of foster care that kept siblings together by hiring dedicated foster parents. In 1998, he was invited by Florida State Representative Evelyn Lynn to bring the program to Daytona Beach where it became known as Neighbor To Family.

Johnson saw the new program as a small “experiment.” He never anticipated that eight years later he would be putting in 50-60 hour weeks. But he can’t seem to slow down. “It’s my life,” he explains. “I work at it, even when I am not working at it.”

Now 74, Johnson sees age working to his benefit. “I am more worldly wise. I don’t panic in situations where I may have where I was younger,” he says. “I see with patience and maneuvering just how to get people in the right place at the right time.”

Neighbor To Family is now working in five states – Florida, Georgia, North Carolina, Maryland and Virginia – and has plans to expand soon to Ohio and Texas. Johnson’s ultimate goal is to bring the program to every state.

“I do it because I see hope and change. I see that people, when given the opportunity, can affect change for the better,” he says. “I also do it out of the personal satisfaction of seeing children grow and develop and handle some adversity with help.”

2015 Update: Since 2007, NTF has served 15,000 children in Jacksonville, Daytona Beach and Bartow (FL); Baltimore (MD) and statewide in Georgia and South Carolina. NTF has implemented two emergency immigrant Border Children Foster Care Programs in Miami and Atlanta, serving 500 children. NTF partners with the NFL team the Jacksonville Jaguars to keep abused and neglected siblings together through fundraising and public awareness events in central and northern Florida.