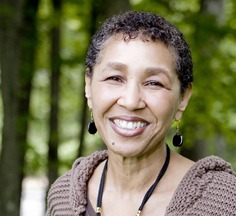 White-Hammond advances political, social and economic justice for Sudanese women by helping the women acquire education and find strength in each other.

A Boston-area pediatrician for nearly 30 years and a pastor for 15, Gloria White-Hammond traveled to Sudan in 2001 as part of a faith-motivated “slave redemption” mission, in which the missionaries purchased the freedom of 6,700 slaves. Though this liberation tactic is highly controversial, when she heard the captives’ horrific stories, White-Hammond had no doubt she was on the right side of history.

“I was standing in the same place that Harriet Tubman had stood, and Sojourner Truth and Rosa Parks and Fannie Lou Hamer and yes, Martin Luther King and Nelson Mandela,” says White-Hammond. “I think at some point you hit a wall and you’ve got to make a choice – whether to move forward in faith or shrink back in fear.”

She moved forward, founding My Sister’s Keeper a year later. The organization supports economic development, health care and education projects developed by women in Sudan, a country beset by ethnic cleansing and a civil war that only ended in 2011 with the formation of South Sudan.

So far My Sister’s Keeper has built a primary school for 525 girls in rural Akon and an adult literacy program for their mothers. (More than 90 percent of Sudanese women and girls are illiterate.) The organization has helped two villages acquire grinding mills, which have saved many women and girls from backbreaking labor – and freed up the girls to go to school.

White-Hammond plans to continue working through My Sister’s Keeper to address social injustice in Sudan, South Sudan and other countries.