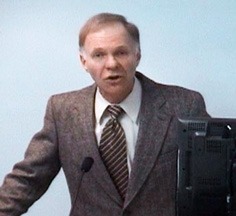 Selnow connects doctors and communities in war-affected regions to the latest medical information and education.

While a Fulbright communications professor at the University of Zagreb in 1997, Gary W. Selnow was asked by the U.S. Department of State to visit war-ravaged Vukovar in eastern Croatia to tell schoolteachers about the Internet. But he found no Internet facilities there.

He persuaded the U.S. Agency for International Development to give him $7,000 for computer networking equipment to provide an Internet connection to Vukovar high school. The students’ stunned reactions upon seeing an outside world where people walk without fear of land mines and snipers’ bullets compelled him, in 1998, to found WiRED International to establish small computer centers throughout the Balkans.

One group of regular users in Kosovo quickly stood out: doctors.

“We noticed that a large number of physicians came to these centers … to read online journal articles and medical texts that the war denied them,” Selnow says.

In response, WiRED shifted its focus to provide free access to computers and the Internet to medical professionals and their communities. Now in war-affected and developing regions around the world, those groups could get medical information and education more readily.

Most recently, Selnow opened a small computer facility in Galilea along the Amazon River in Peru.

WiRED also connects communities to health information through a comprehensive interactive online library and free training modules for nongovernmental organizations working with disadvantaged populations. Selnow aims to work closer to home by distributing materials in the poorest regions in the United States.