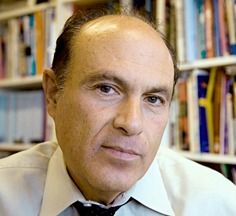 As a doctor who studies epidemics, Slutkin works to reduce violence in urban communities by treating it like a disease that must be stopped at the source before it infects others.

Physician Gary Slutkin spent 20 years working to reduce rates of infectious diseases, including tuberculosis and AIDS, in the United States and Africa. In 1995, after 10 years living abroad, he returned home to Chicago. Noting the high rate of lethal violence among young people in American cities, Slutkin began treating violence as a contagious disease, applying the tools he used in disease control.

“Decades of leaving the problem untreated perpetuates retaliation, further victimization and exposure, which keeps this cycle of violence going for generations,” Slutkin says.

After five years of intensive study, in 2000 Slutkin piloted CeaseFire (now known as Cure
Violence) in one of Chicago’s most violent neighborhoods, West Garfield Park. Within a year, gun violence dropped by 67 percent. During the next decade, Cure Violence saw similar results in 17 other neighborhoods.

Today Cure Violence is in 15 cities and seven countries, including locations in Latin America and the Middle East.