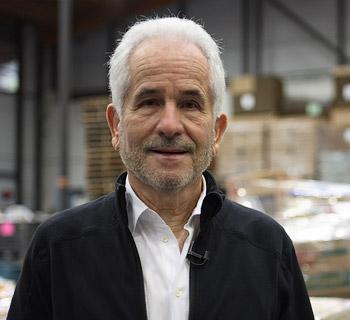 Redistributing tons of nutritious produce to people in need.

After more than three decades in the food distribution business and one year as a VISTA volunteer at the San Francisco Food Bank, Gary Maxworthy was quite familiar with two realities: 1) Food banks typically distribute canned and packaged goods, shunning most fresh produce because of its cost and rapid rate of spoilage – and denying poor people access to many foods critical to maintaining good health and normal weight. 2) Food distributors typically send millions of pounds of fresh produce to landfills every year, because it’s “non-market-standard,” in other words, not perfect.

In 2000, tired of the overwhelming waste and need, Maxworthy rolled up his sleeves and created a new system to directly connect fruit and vegetable growers to food banks and distribute non-market-standard fresh produce to the poor. In its first year of operation, the program distributed 484,000 pounds of fruit. In 2006, after expanding into a statewide effort called Farm to Family, Maxworthy’s program was able to distribute 22 million pounds of fresh apples, avocados, cantaloupe, onions, potatoes, watermelon, corn on the cob, squash, and other produce to nearly 40 California food banks.

Nearly 3 million Californians lack the money to consistently provide food for themselves and their families. While there are many factors contributing to hunger in California, lack of food is not one of them. In particular, there is no lack of fruit and vegetables in California, but fresh produce – critical to ensuring health and maintaining a healthy weight – rarely gets to those who need the state’s food banks.

Enter Gary Maxworthy, a former businessman with 32 years in the food distribution business. Maxworthy joined the staff of the San Francisco Food Bank as a VISTA volunteer in 1993, soon after his wife died from cancer. He was 56, his children were grown, his home was paid off, and he was ready to give back.

Maxworthy wasn’t on the job long before he diagnosed two big problems – or, as he saw them, opportunities. First, growers typically send millions of pounds of fresh produce to landfills each year, because it’s “non-market standard,” in other words, perfectly edible, just not perfect looking. “They all had products they had to dump like mad,” Maxworthy says.

Second, individual food banks typically ask for small donations of non-market standard produce, but growers have high-volume “waste” to get rid of. The mismatch prevented the deal.

The solution, Maxworthy determined, was to persuade food banks to join together to approach produce growers for bulk donations of free or low-cost produce. But engendering a spirit of cooperation involved shifting the culture of some fiercely independent food banks.

“They had this idea that there was a finite amount of food and if one food bank got some, they wouldn’t get any,” Maxworthy says. “The reality is that by working together, we’re so much stronger and we can actually access so much more food.”

Food bank by food bank, Maxworthy persuaded leaders to collaborate. The result is Farm to Family, a statewide program spearheaded by Maxworthy and run under the auspices of the California Association of Food Banks. Now a coalition of 40 food banks provides growers and packers with plastic bins each capable of holding 800 pounds of produce, picks up the bins in contracted refrigerated trucks, and distributes the produce to participating food banks.

In 2000, a local version of the program distributed 484,000 pounds of fruit. In 2006, Farm to Family distributed 22 million pounds of fresh apples, avocados, cantaloupe, onions, potatoes, watermelon, corn, squash, and other produce to nearly 3 million people.

Moving 22 million pounds of perishable produce into the hands of low-income residents requires that local food banks lease or build warehouses, solicit large numbers of volunteers to sort food, and establish pantries to distribute it. For some food banks, financial difficulties have made these steps a struggle. They’ve been unable to fully serve their clients, the majority of whom are minimum wage workers and low-income seniors.

Another, more subtle obstacle to the program’s growth is resistance at some food banks to handling large amounts of messy, perishable produce, after years of dealing with minimal produce and lots of canned goods. “A warehouse guy might say, ‘I don’t want to be cleaning all this stuff,'” Maxworthy notes.

Maxworthy faces this challenge by drawing on his background as a salesman. “How you think things through, present it to people, and get them to cooperate is what I find fascinating,” he says. “It’s very grassroots stuff – hands-on, one-on-one contacts.”

Maxworthy has been building those contacts for 13 years. While he started at the San Francisco Food Bank as a volunteer, he now works as the food resource manager and serves on the nonprofit’s board. When he started at the food bank, it was a modest operation.

“We were a hole-in-the-wall with a 10,000 square foot warehouse and no bathroom – we used the bus depot next door,” Maxworthy recalls.

Now the bank is a smoothly functioning food distribution center. As trucks pull up throughout the day, food bank employees unload cartons of cereal, canned beans and salad dressing as well as bins of apples, yellow squash, watermelon, and other produce. Volunteers pack small boxes with the dry goods and produce, which are then loaded onto pallets and trucked to 162 food pantries around the city.

Over the past decade, the organization raised $8 million to build a 55,000-square-foot warehouse on land donated by Pacific Gas and Electric. Instead of relying on donations of sometimes worn-out forklifts, the food bank persuaded donors to sponsor the purchase of new equipment. And because of the organization’s well-developed relationships with corporations and other groups, 7,000 volunteers – the equivalent of 32 full-time employees – help staff the operation each year.

At a time when public concern about childhood obesity is on the rise, Farm to Family has raised public awareness of the importance of providing fresh produce to food banks. “There’s momentum growing around the need to get nutritious products to those in need,” Maxworthy says. “With the example we’ve set and the publicity we’ve generated within the food bank network, there’s no question that produce is the number one growth food donation goal across the country.”

Getting fresh fruits and vegetables to children is top priority. The San Francisco Food Bank has set up 36 Healthy Children food pantries to distribute produce and dry food at public schools, childcare centers, and other family-oriented locations.

At Marshall Elementary in the Mission District of San Francisco, Pilar Romero takes a few minutes to pick up sliced carrots and squash, as well as pouches of chicken soup, from a table in a sunny courtyard at her daughter’s school. “I’ll make a pizza with this,” she says, holding up a bag of sliced mushrooms and carrots, “and I’ll make a quesadilla with some of that,” she says, holding up a bag of yellow squash.

To entice families into taking the produce home, Araceli Villalobos, the school’s parent liaison, serves samples of chicken soup made with mushrooms, carrots, and squash. This week’s yellow squash look more bruised than most, Maxworthy says, but Villalobos isn’t fazed. “I teach them how to cut off the spots and cook them,” she says.

Maxworthy is pleased to see the Healthy Children food pantries, but, after 13 years, he’s still distressed to see hunger. In a typical week, he spends at least one day out in the Central Valley, the major food growing region in California. There, he’s face to face with people who pick the crops but can’t afford to buy enough to eat. He says their hunger provides his motivation and boosts his goals.

“We’ve set a goal to distribute 67 million pounds of fresh produce by 2012 to low-income Californians,” Maxworthy says. “This program is just taking off.”