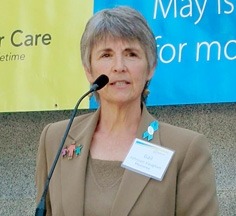 Vaughan identifies ways to find permanent homes for older foster children and helps policymakers figure out how to pay for them.

During the 20 years she ran an adoption agency in California, which has the highest number of foster children in the nation, Gail Johnson Vaughan was routinely dismayed by the assumption – common among professionals in the foster care system – that finding permanent homes for teens was nearly impossible.

“I found myself thinking that my job was keeping me from doing my work – using my experience, connections and learned wisdom to influence transformative systemic improvements in child welfare,” Vaughn says.

The result is Mission Focused Solutions, which since 2008 has worked with local policymakers to identify budgetary savings that can then be reinvested in programs that place youths ages 11 to 18 in permanent homes.

The agency evolved from a pilot project called Destination Family, which Vaughan developed in the California counties of Sacramento, Placer and Nevada. By the end of its fifth year, the program had found permanent families for 86 percent of the youths referred for services, youths who were in this supposedly hard-to-place age bracket. Destination Family faced possible shutdown when its federal funding was slashed. That’s when Vaughan realized she had to work with local governments to ensure a better life for foster children.

After quitting her job, Vaughan proposed funding reforms to foster care that can save counties up to $95,000 per child. Three counties have adopted her proposed reforms, and each has reinvested the savings in the Destination Family model. Now Vaughan hopes to take her advocacy nationwide to overcome what she calls “systemic barriers” to helping older youths find loving families.