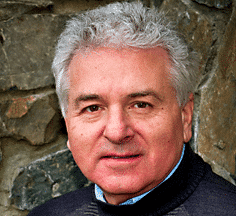 A quarter of American high school students drop out before graduation. What if the problem isn’t teachers or schools, but how we measure learning itself—as “seat time” spent in a class?

Despite his academic struggles, in 1972 Bramante opened the first Daddy’s Junky Music in New Hampshire, which grew from a hole-in-the-wall shop opened with his $600 life savings into a $35,000,000 music retail business. He also spent six years a science teacher.

That’s why when in 2003 the governor of New Hampshire asked Bramante to become chairman of the State Board of Education, he seized the opportunity to leverage his experiences as a teacher and an entrepreneur and launched an encore career devoted to revolutionizing how students learn.

Bramante’s higher purpose is to get would-be dropouts to stay in school and excel. His chosen means: transform public education from a system anchored in time and place—180 days in a school building—to an “anytime, anyplace, any how, any pace” system based on mastery of required competencies.

In 2005, New Hampshire became the first state to require high schools to assign credits towards graduation based on competency rather than seat time. Since then, students have had opportunities like taking karate lessons, playing in an orchestra and learning about cars at the dealership—all for credit towards graduation. The dropout rate has fallen to 5%.

The New Hampshire model won the State Innovation Award from the Education Commission of the States in 2011 and 2012.

Bramante has now formed the National Center for Competency-Based Learning to take the movement nationwide. Of his encore calling, he says, “We’re giving students the opportunity to choose how, where and when they will learn. Why would someone drop out of school?”