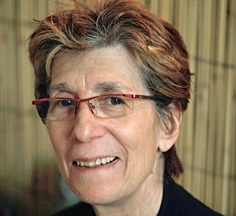 Hyneman, a former English professor, helps women in Afghanistan as an advocate for human rights.

When Esther Hyneman retired after decades as an English professor, she decided she wanted to pursue an international career. Outraged by the rape, murder and silencing of women under the Taliban, Hyneman became interested in advocacy work to help the women in Afghanistan achieve basic human rights – to safety, to an education, to work.

In 2001, just after 9/11, Hyneman began volunteering with Women for Afghan Women (WAW), a New York-based organization that had been formed six months earlier. Now she is on WAW’s board of directors. In the past 10 years Hyneman has led efforts to create and support WAW’s Family Guidance Center in Afghanistan, which offers counseling and legal representation to women experiencing human rights violations.

Hyneman has also helped establish the Children’s Support Center in Kabul, Afghanistan, a residence for children who had been living in prisons with their mothers; a women’s human rights awareness training program; and halfway houses for women transitioning from prison or shelters and cannot return home. (Bibi Aisha, who was on the cover of Time magazine in 2010 after her nose and ears were cut off by her husband and male in-laws, is one woman WAW is assisting). WAW opened three Family Guidance Centers and shelters, two additional Children’s Support Centers and two halfway houses this year. In just the past year, the group has secured access to justice for more than 1,000 women.

“If the unthinkable happens, if Afghanistan falls to the Taliban, I will grieve over the fate of all the women I know there – colleagues, friends, clients, children who escaped from unthinkable horror only to be swallowed up again,” Hyneman says. “If WAW has to close, I will find another way to advocate for their freedom.”