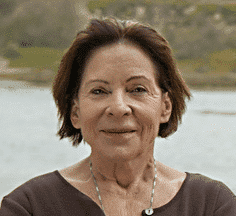 Elizabeth Huttinger spotted a big idea in a little shrimp, one that could eradicate a disease infecting millions of the world’s poorest.

Over lunch one afternoon in 2004, Elizabeth Huttinger listened carefully as evolutionary biologist Dr. Armand Kuris told her he had a cure for schistosomiasis, the fourth largest parasitic disease in the world.

Huttinger, whose daughter was a student of Kuris’s at the University of California, Santa Barbara, was deeply skeptical. A longtime consultant in international development and community health, she had spent years working on tuberculosis and HIV/AIDS prevention programs. She was also familiar with schisto, a water-borne, parasitic ailment, from her work related to the disease in Egypt. Schisto is transmitted via small freshwater snails in lakes and rivers where people wade daily.

With 240 million people in 76 countries suffering every year from diarrhea, seizures, liver and bladder cancer, and sometimes death, schisto’s global impact is second only to malaria’s. Yet the disease is largely ignored on the international stage. Drug treatments can be futile, since most people are reinfected. Many donors and researchers seemed to have given up on finding a cure.

Despite her initial doubts, Huttinger couldn’t repress a thrill of excitement as Dr. Kuris outlined his plan. His innovative idea was to use the snail’s predator, the prawn, to keep the snail population in check, which could eradicate transmission of the disease. She knew the prawns could also be a source of income and food for affected communities.

That afternoon, her skepticism transformed into purpose, and she was moved to act. She knew she could help change the lives of millions. “It really boils down to the fact that somebody else’s children are as important to them as mine are to me,” Huttinger says. “And I just couldn’t stand by, watching the sickest people get ignored.”

That afternoon, Projet Crevette, or the Prawn Project, was born. Since founding the nonprofit in 2006, Elizabeth Huttinger, 63, has devoted her encore career towards restoring the prawn population in the Senegal River Basin. Projet Crevette’s mission is multifaceted: in addition to restoring environmental diversity, the restoration of the prawn population both diminishes the spread of schisto while providing new economic opportunities to afflicted communities. Thus far, the project’s innovative use of prawns as a form of vector disease control has been five times more effective than the medicine most commonly used against schisto.

At the time, Huttinger had years of experience working in country program development for the U.N. Global Fund and other organizations. But she was frustrated and demoralized by the way politics often stonewalled solutions—for example, how the Bush administration’s abstinence-only sex education requirements failed to halt the spread of HIV and AIDS in developing countries.

To Huttinger, the prawn project provided a rare opportunity to make a game-changing impact on a significant global health problem. “Along came this brilliant idea, and I knew how to develop it, and I thought, ‘I’m just going to go for it.”

“Elizabeth had a lot of experience with aid projects and public health, and a variety of challenging countries to work in,” Kuris says. “She was quite up to speed on the nature of what things are like in impoverished countries.”

Schisto affects the poorest 10% of the world’s population, mainly in West Africa and sub-Saharan Africa. Some 200,000 die each year. Senegal has the world’s highest infection rate, so Huttinger and Kuris began there.

The first step was research. Scientists interviewed locals about the rivers and lakes they used for washing and swimming. To their surprise, they learned that an indigenous prawn species had once widely inhabited West Africa’s Senegal River Basin. A manmade dam built in 1986 had blocked the prawn’s natural migration and predation on snails.

Snail populations soon exploded—and so did the number of schisto infections. Before 1986, northern Senegal had no intestinal schistosomiasis. By 1994, virtually the whole population was sick.

Huttinger began working the phones, coordinating a broad six-month study to test the prawn theory. She reached out to various Senegalese government agencies and local universities, where graduate student scientists volunteered to help.

They stocked three village watering holes with the native prawns, flown in from Cameroon. Two additional watering holes served as a control. In just six months, they saw astounding results: Projet Crevette had reversed an epidemic that had ravaged local communities for three decades.

“It’s a new strategy in disease control,” Huttinger says. “There was nothing new in schistosomiasis in 30 years. People were sick and dying, and there was no solution.”

Today, Projet Crevette is a prawn-farming microenterprise, operated by locals at public watering holes. The project is sustainable, empowering the very people affected by the disease to essentially cure themselves and their children. It’s also socially innovative, creating microbusinesses and restoring the environment while improving health.

The Senegalese government has taken notice. In 2013 it made a commitment of $400,000 to Projet Crevette’s work. The Bill and Melinda Gates Foundation is a matching donor.

In the past year, Projet Crevette has evolved from studying schisto to building a prawn hatchery—and, Huttinger hopes, a movement. The next steps include stocking prawns throughout 106 miles of interconnected waterways over a 30-mile area in the Senegal River Basin. They also plan to release 20,000 fingerling prawns each month, and will construct fish ladders on dams to aid the prawns’ migration.

And students from Ben Gurion University’s Aquaculture Center in Beersheba, Israel, are trying to breed a new kind of “super” prawn that will hunt snails even more aggressively.

Schisto remains a “neglected” disease. That’s why Huttinger is pushing to make Projet Crevette’s approach—the eradication of schisto through vector control—a core tactic of the global Schistosomiasis Control Initiative, a partnership at Imperial College London that includes the Bill and Melinda Gates Foundation, the WHO and the Harvard School of Public Health.

This approach has applications beyond schisto, Huttinger says. “Vector-based environmental approaches to disease control can definitely be used going forward. Using bed nets to combat malaria was a classic example: it wasn’t a natural approach nor was it self-sustaining, but it was still incredibly successful in controlling malaria. For other parasitic diseases, especially with secondary animal hosts, you can look for a predator to find a living, self-sustaining solution—one that restores, and keeps on going, fully sustainable and without further investment.”

Huttinger is confident Projet Crevette will meet its bold goal to fully restore the indigenous prawn population—and improve the lives of so many.

One Senegal River beach where Projet Crevette has worked has tested free from infected snails since October 2012. “Every month, we test, and every month, I think, ‘They’re gonna find one,’” Huttinger says, beaming.

They haven’t. On a visit to the village in May 2013, Huttinger tossed some inflatable beach toys to the children playing in the once-dangerous water and waded in to join them. She swam freely, unconcerned for the disease that once lurked within the water. The infected snails never crossed her mind.

Since Huttinger began Projet Crevette, she’s always had faith in the idea and her own abilities and experience. That’s something she hopes to pass along to her staff of mostly students and interns.

“With experience, perhaps we learn how to do things better, more artfully, more ethically. And there’s a basic responsibility to transfer such skills to young people,” she says. “All of the pieces of this project presented themselves to me. It was like it was meant to be.”