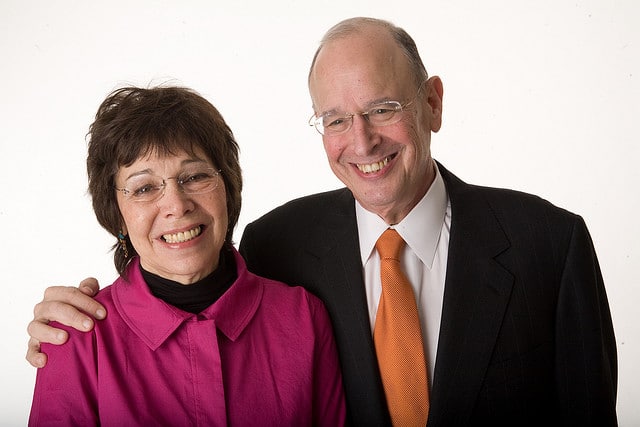 The Aldermans honor their son, killed on 9/11, by bringing mental health treatment to more than 100,000 trauma victims in nine countries around the world.

The death of their son on 9/11 brought Elizabeth and Stephen Alderman merciless grief. Soon afterward, they learned in a news report that a billion people around the world had experienced severe trauma. The Aldermans could relate. They understand: Suffering is suffering. To honor their son and to treat living victims of trauma and terrorism, they created a globally focused foundation that helps create homegrown mental health systems chiefly in Africa, where violence of all kinds – rape, war, kidnapping, the unspeakable – has desecrated communities.

In the agonizing months that followed 9/11, Elizabeth Alderman suffered many sleepless nights mourning the death of her youngest son, 25-year-old Peter, who had been killed at the World Trade Center. There were so many people who could have prevented it, she thought, so many who could have saved her son.

A segment on Nightline documenting the mental anguish of refugees helped Elizabeth and her husband, Stephen, begin to turn anger and devastation into healing – for themselves and, eventually, for nearly 100,000 victims of violence, terrorism, and torture around the world.

Richard Mollica, the director of the Harvard Program in Refugee Trauma who had been featured on Nightline, answered the Aldermans’ call and met with them. A sixth of humanity – a billion people in 50 countries – has survived severe trauma, he told them. Many are so debilitated by their emotional wounds they are unable to work or care for their families. With proper treatment, 80 percent can and do recover. Sadly, proper treatment is unavailable in many parts of the developing world.

The Aldermans – both 68, he a retired oncologist and she a former special education teacher and homemaker – decided to intervene. With money from the 9/11 victims’ compensation fund, the grieving parents founded the Peter C. Alderman Foundation in 2003. Its goal: to foster homegrown mental health systems around the world in partnership with indigenous academic, government, and religious institutions.

The foundation’s clinics are natively administered and staffed. Patients are treated with culturally specific methods. Western approaches to mental health – including talk therapy, cognitive behavior therapy, and psychotropic medications – are often supplemented with spiritual counseling at a local church or with a traditional healer.

“We are the first and only sustained and coordinated program to deal with populations that have been traumatized by conflict in Africa,” says Stephen. “It’s never been done before.”

Since its inception, the Aldermans’ foundation has trained nearly 350 doctors in 19 countries to diagnose and treat trauma victims. Those doctors in turn have trained hundreds of nurses and other medical professionals. The foundation also runs nine mental health clinics in Cambodia, Uganda, Rwanda, and Haiti.

Africa is increasingly the foundation’s focus. For the past two years, the organization has held the East African Training Seminar in Kampala, Uganda, to teach doctors, psychologists, psychiatric social workers, and nurses from Burundi, Democratic Republic of the Congo, Ethiopia, Kenya, Liberia, Rwanda, Somalia, Sudan, Tanzania, Uganda, and Zimbabwe.

Collectively, those countries are home to 240 million, and debilitating traumatic depression affects more people than HIV/AIDS, tuberculosis, and malaria combined.

In July 2008, Elizabeth made her first trip to one of those countries – Uganda. Stephen had traveled there several times and had warned her that it would be hard to witness what they would see. A decades-long war between the Lord’s Resistance Army and the Ugandan government had devastated the population, most notoriously through the use of child soldiers forcibly conscripted into the rebel army. Post-traumatic stress disorder runs rampant.

“It was such an eye-opening experience,” Elizabeth recalls. “Incredible. I had been prepared that it was going to be difficult, with starvation, AIDS.” But another kind of starvation struck Elizabeth: the utter dearth of stimulation, education, purpose, or distraction.

“These people have absolutely nothing to do from the moment they open their eyes until they close them at night,” she says. “There are no books, no television, nothing. I didn’t think my heart could break any more than it had, but it did.” Elizabeth better understood how the foundation’s clinics helped Ugandans – especially children.

Child soldiers there who have returned to their communities are often greeted with hostility or worse; too many remember the crimes they committed before they left. Some tribal chiefs use a cleansing ceremony called mato oput, “the drinking of the bitter root,” to reconcile transgressors and their victims.

The ceremony – which the foundation learned about by conducting focus groups with local communities – has been so successful in terms of reintegrating these child soldiers back into their communities, where they might own land, marry, hold a job, or otherwise become productive citizens, that “we won’t see kids in our treatment centers until each child is cleansed in a tribal ceremony,” says Stephen.

One such child was treated by psychiatrist Thomas Okello Oyok, a doctor trained by the foundation who is the director of its clinic in Gulu, Uganda. The child was kidnapped at 14, commanded to mutilate his brother with a machete, and forcibly conscripted into the Lord’s Resistance Army.

Diagnosed with post-traumatic stress disorder, depression, and psychotic episodes, he has received medication and therapy, and his ongoing care is monitored by a case worker. In less than a year of treatment, the former solider worked as a mason in a boarding school for students affected by war trauma.

“With the intervention of the Peter C. Alderman team in Gulu, we have managed to get him on with his life and to concentrate on his future,” Oyok says.

Seggane Musisi, a senior consultant psychiatrist with the Ugandan government’s Ministry of Health says the foundation is “already having a big impact not only on the victims it is helping but is also forcing governments to re-think their programs – or lack of them – regarding their massively war-traumatized millions.”

In the Siem Reap region of Cambodia, where post-traumatic stress caused by the genocidal predations of the Khmer Rouge persists, clinic staff monitor whether child patients attend school every day and whether their grades are improving. They track how many adult patients kick alcohol or drugs, hold down jobs, or take their medication.

The hope is to demonstrate to resource-poor countries that the foundation’s clinics provide an affordable, efficient model of mental health care, and can contribute to a country’s social, economic, and political stability.

It has been a strange, painful, and enlightening journey for the Aldermans, who now sit on the foundation’s board. (Their daughter, Jane, is the executive director.) They never anticipated spending their later years working 12 hours a day or traveling to the developing world.

“But we are in an enviable position, in our late 60s, to be learning something new every single day,” says Elizabeth. “I have none of the inhibitions that I had before. I’m a braver person, a wiser person, a more effective person. And I’m a sadder person. There’s always going to be that hole there, but I think this part of my life is very, very fulfilling.”

Because the foundation’s creation is inextricably linked to Peter’s death, it is emotionally complex territory. “I don’t want anything good to come out of my son’s death. I don’t like that,” Stephen says. “But there’s no doubt in my mind that because Peter lived, and I guess because he died, this world is going to be a different place. We hope a better place.”