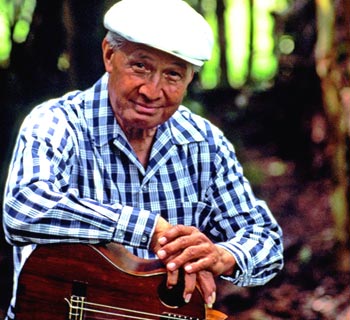 Preserving and perpetuating the cultural heritage of Hawai'i

Eddie Kamae, now 79, was in his sixties when he began to make documentaries. A professional musician, he dove into filmmaking after being inspired by a 90-year-old traditional Hawaiian songwriter. In his film work, Kamae tells the stories of Hawaii and its people before the state’s rapid transition from an isolated agrarian community to a Western-influenced modern society. His goal is to pass on the traditional values, voices, and culture to younger generations. In his eight films, Kamae has captured the words, songs, expressions, and activities of more than 40 kupuna, or Hawaiian elders, the last living links to pre-modern Hawaiian life. The films have been shown at major film festivals in the United States and have been purchased by the state prison system for its rehabilitation program. Though 2.3 million people have seen his work, including 800,000 school children, Kamae works to make sure his films remain widely accessible and to preserve the irreplaceable materials entrusted to him by his subjects.