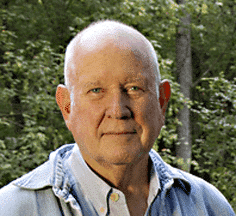 When military man Ed Nicholson saw disabled young veterans struggling to remake their lives, he launched an encore career that is healing soldiers through the power of relationships and the great outdoors.

Every Wednesday afternoon since 2005, through the muggy Washington summers, wounded soldiers cast fly fishing lines over the green grass in front of the Walter Reed National Medical Center. Trying to catch lawn trout may seem quixotic, but practicing the rhythmic casting motion is a therapeutic variation on military drills.

That’s not a sight visitors to the veterans’ hospital would have seen before Edwin Nicholson found a new purpose in the second stage of life. In 2005 the former Navy captain and Vietnam veteran, who had commanded two ships and two naval bases in his 30-year military career, was retiring for the second time. He had just spent a decade as an executive with a defense contractor and was ready to spend his days fishing and hunting. “I was going to wear my casting arm out and see how many birds I could find,” he says. “I had no thoughts of helping anyone else out.”

But then he was diagnosed with prostate cancer. Like many veterans, he was treated at Walter Reed. As he recovered from surgery, hobbling down the hospital halls, he found himself surrounded by young athletic men and women who had returned from tours in Iraq and Afghanistan with life-altering disabilities—missing limbs, traumatic brain injuries, deep psychological scars.

“It gave me a different perspective on my healing process,” he says. “I wanted to do something immediately. I had to think they would enjoy getting away from the hospital and into the outdoors.”

And that’s when he decided to take some of them fishing.

What began as an idea for a diverting day trip for soldiers has evolved into Project Healing Waters Fly Fishing (PHWFF), the organization Nicholson, 71, founded to help disabled soldiers and veterans heal from the physical, mental and emotional toll of war through fly fishing.

Cast by cast, line by line, it’s reshaping the lives of thousands of veterans across the U.S. Project Healing Waters Fly Fishing now has 158 programs in 48 states as well as affiliates in Australia and Canada. In 2012 alone, 2,300 volunteers invested 122,000 hours to work with 4,000 wounded warriors.

There is an enormous social need that PHWFF is attempting to fill. After a dozen years of war, the Department of Veterans Affairs (VA) is overwhelmed trying to provide healthcare to 8.3 million vets a year. Improved battlefield medicine means more soldiers survive, but it also means many more come home injured. War’s toll on their bodies and minds are often difficult to explain to those who haven’t experienced it; in 2012, more active service members died through suicide than in combat. Twenty-two veterans kill themselves every day.

“Without the thousands of organizations that support the VA, God help us, society couldn’t pay for all the services nonprofits offer,” Nicholson says. “Project Healing Waters doesn’t make anyone wait. We provide an intimacy to our approach that the VA doesn’t and was never designed to provide.”

One-on-one connections have been key to PHWFF’s approach since the beginning. Nicholson knew there were fly fishing groups and facilities all over the country. His innovation was to convince them to start, manage and lead fly-fishing instruction and outings with veterans.

First they taught soldiers the art of tying the tiny delicate “nymphs” that lure fish. Then they began to take them fishing. They rolled wheelchairs onto river gravel bars, helped those with new prosthetic legs wade into a stream, and showed how them to cast a line even with a missing hand.

The quiet bonds forged over fishing lines between veterans began to transform lives. Again and again Nicholson heard from family members who said their loved ones had returned from war withdrawn, angry, and difficult to be around. But after fly fishing with Project Healing Waters, they’ve become happier, more open and engaged.

Both participants and occupational therapists at Walter Reed saw the program’s value and turned into eager ambassadors for Project Healing Waters Fly Fishing. “It’s essential to build that credibility,” Nicholson said. “After that, it started to roll and gather momentum.”

Nicholson’s innovation was to connect existing organizations, scaling up their effectiveness. PHWFF covers the costs of fishing gear and logistical support.

Project Healing Waters Fly Fishing works with any disable service member or veteran who wants to participate. Many are in wheelchairs or using prosthetics. A few are blind. Most participants are men, reflecting the population of disabled veterans.

Eivind Forseth was an early, and initially reluctant, participant in PHWFF. An army lieutenant, he had lost the use of his right hand and most of the mobility in his elbow in an IED explosion in Iraq in 2005. “I was having a really hard time. I had come from being so independent and so physical to having this challenge. I was angry and depressed. I couldn’t tie my shoes very well. It was hard to dress or bathe myself,” says Forseth, who had grown up fly-fishing with his father in Montana. “I was so frustrated and discouraged, I couldn’t bear to try fly fishing and fail.”

At the insistence of his occupational therapist at Walter Reed, Forseth joined one of the first-fishing trips Nicholson organized. The experience was a revelation. “Once I got in the water with the fly rod in my hand, it started coming back to me,” Forseth says. “The shock as a trout hit the line went through my soul like a bolt of lightning. That single moment had more impact on me than the blast in Iraq, because I knew I was going to be ok. I was going to adapt and be fine.”

He decided it was his mission to introduce other soldiers to PHWFF. Today he’s president of the organization’s Veterans’ Advisory Council. The married father of a baby girl, he works in program management for the Navy. And he still gets out on PHWFF trips.

Like Nicholson, the majority of volunteers are in the second stage of life. Douglas Dear, a retired mortgage banking executive, is one of them. The chair of PHWFF’s board, Dear made the fly-fishing retreat he runs on his Virginia farm available to Project Healing Waters—then got hooked himself. “These young men and women find themselves retired from the military at an age they never anticipated that to happen,” he says. “They’re striving to find something to do with their life. The program helps them move on to the next thing.”

Nicholson says the volunteers “want to help anybody become better fly fishers, but couple that with really helping someone who has become disabled in the service of their country—well, bam, you’ve made a connection that is very strong,” Nicholson says. “It goes well beyond the mechanics of fly fishing.”

In his encore career, Nicholson will continue to support veterans in their fight for healthy, stable lives. Having led sailors for three decades as a ship captain and base commander, Nicholson knows each person’s healing from the experience of war is unique. But what unites them all is the need for deep, caring connections with people who understand.

Nicholson recently got an email from a veteran of Vietnam and Desert Storm who after retiring from the military had lost a sense of purpose and eventually ended up on a suicide watch. In his email, he said the program had literally saved his life.

“That’s all the motivation I need,” Nicholson says. “If we’re helping people adjust, adapt and get more out of life, that’s why we keep going.”