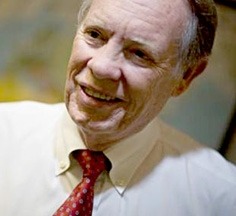 Johnston works with religious and political leaders in geopolitical hot spots around the world to support peacemaking.

By his late 50s, Douglas M. Johnston, a distinguished Naval Academy graduate and former director of policy planning and management for the Office of the Secretary of Defense, was considered a leading thinker on faith-based diplomacy. And he was author of several books on U.S. foreign policy.

“I saw a need to incorporate religion as part of the solution,” he says.

That’s why in 1999, with only $10,000 in funding, Johnston established the International Center for Religion & Diplomacy (ICRD) to practice faith-based diplomacy in such places as Afghanistan, the Middle East, Iran, Sudan, Pakistan, Kashmir and the United States.

For the past seven years, ICRD has worked in Pakistan with 2,909 leaders from 1,611 madrasas, or religious schools, often considered breeding grounds for extremists. The goal: to implement credentialing standards for teachers and to institute an expanded curriculum that includes the physical and social sciences, with a strong emphasis on religious tolerance and human rights, particularly women’s rights.