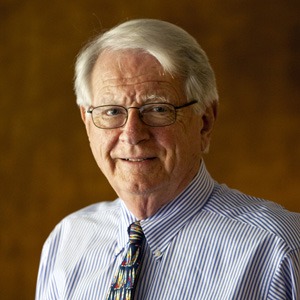 Unspeakably squalid conditions, screaming, naked people running down hallways – that was the norm at a Tennessee hospital and school for people with severe mental and physical disabilities in the late 1950s.

A psychologist-in-training at the time, Donald Stedman wondered how many bright people trapped in broken bodies lived there. He worried about the most vulnerable among them – the children.

From those early days in Tennessee, Stedman says one thing was clear: Very few people wanted to “waste their time” on children with disabilities. Sadly, says Stedman, who has a 15-year-old grandson with autism, that’s essentially still the case.

In 2005, Stedman launched New Voices to reverse course and help young people with extreme mobility and communicative disabilities get good educations in public schools. The organization aims to properly serve this complex student population, one that – in Stedman’s view – most schools don’t.

Some of these children, Stedman says, have active minds, even though they cannot speak or move. Stedman calls them “low-incidence, high-impact children,” because their disabilities are complicated and expensive, draining both emotional and financial resources.

“It’s very easy for a kid to go into a classroom with someone who knows them and can assist them,” says Stedman, sitting in New Voices’ one-room headquarters just outside Durham, N.C. “The problem is coordinating the assets they need, because it’s a subject few people are willing to talk about. I want to make this subject less taboo and create a model that could be a beacon for others trying to help similar children.”

To get New Voices off the ground, Stedman started by coordinating assets of a different sort. Leaning on decades of experience and his own large professional network, he gathered health professionals, school officials and parents, pairing their areas of expertise with financial support from various local organizations.

Today New Voices’ mostly volunteer staff counsels schools on the best strategies to engage disabled students, then helps to assess technological and teacher training needs. The organization has trained more than 50 teachers in four school districts and plans to hold a training conference in the fall.

“New Voices is really playing an important role,” says Laura Lewis, a Wake County, N.C., school district assistive technology expert. “Some schools have some technology, others have none, but teaching the teachers how to reach these kids is a huge piece of this puzzle.”

New Voices is raising funds to open its own school within the next two years. Stedman expects the school to have four classrooms that will serve area students. The students will be able to attend the school for up to a year, as New Voices helps establish a support base involving assistive technologies to help the students transition to public schools.

Stedman comes to this work after a long career devoted to recognizing the often hidden abilities of children with disabilities. A clinical psychologist, he participated in the design of the National Institute for Child Health and Human Development and helped conceptualize and develop the Special Olympics. Among his many prominent positions, he was chief pediatric psychologist at Duke University Medical Center and served for a decade as dean of the school of education at the University of North Carolina at Chapel Hill.

But many say Stedman’s purest gift is his ability to connect with the young people he wants to help.

“Most people will lean over a child who is in a type of assistive chair, and in so many ways, that’s condescending,” says Missy Lohr, past chair of New Voices’ board. “But, Don, who is over 6 feet tall, will crouch down on his knees, get eye-to-eye with these kids and speak to them on an age-appropriate level. When he does this, you can see a difference in the way the kids respond. They seem to light up.”

Lohr’s daughter Lara was the type of student New Voices plans to serve. Lara had cerebral palsy and couldn’t speak or move. Before she died in 2002 she completed her bachelor’s degree from the University of North Carolina at Chapel Hill, using technology involving a camera and software that produced words in response to her eye movements. She also had a personal assistant who accompanied her to classes.

According to the U.S. Department of Education, there are approximately 132,000 children with such disabilities in the United States, and providing them with special education services tops $74 billion annually.

Bill McNeal, a New Voices adviser and executive director of the North Carolina Association of School Administrators, says that in the Research Triangle Park area – anchored by Duke University, North Carolina State University and the University of North Carolina at Chapel Hill – there are roughly 300 children in that category. They are often restricted to self-contained classrooms or are home-schooled. But they have the intellectual ability to succeed academically in public schools with proper assistance, McNeal says.

“We have a substantial need in our school districts. The resources exist, and our superintendents talk about how they want to do better in helping these children,” McNeal says. “Up until now, we’ve been paying for them to go elsewhere, sometimes out of state, to get the services they need. We simply need to do a better job.”

Stedman is convinced that New Voices can help. He’s confident that the experience and passion he is able to pour into the organization after decades of working with children with disabilities will make a difference for local students and, possibly, for students nationwide.

“Since I am nearing 80, I may step down from my role as CEO as early as next year, but I have used my network and experience to give New Voices its own power,” Stedman says. “Organizations are successful when they stand on their own. But I don’t intend to leave – either as a board member or an adviser – until they carry me out the door.”