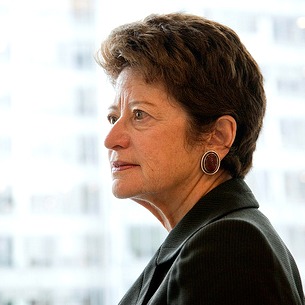 From the desk of her corner office on the 48th floor of a Times Square skyscraper, Dana Freyer has a sweeping view of some of the most famous landmarks in the world, from the Empire State Building to the Statue of Liberty.

What Freyer can’t see are trees. And yet for the past seven years, in one way or another, all she’s seen are trees.

She is a co-founder of the Global Partnership for Afghanistan (GPFA), a nonprofit organization that since 2003 has helped 12,000 Afghan farmers plant 8 million trees. The farmers’ revitalized woodlots, vineyards, orchards and other farm businesses are bringing financial stability to nearly 84,000 people in one of the poorest countries in the world.

The seeds of GPFA were planted shortly after 9/11, when Freyer, her husband, Bruce, and several Afghan expats, long-time friends, were discussing how to help Afghanistan. Now that the Taliban had been ousted by NATO forces, the group saw a chance to help revitalize the country.

“It wasn’t a question of if we would help,” recalls Freyer. “It was how.”

Freyer was motivated by an appreciation of Afghanistan that goes back decades. From 1965 to 1968, her first job out of college was as assistant to Abdul Rahman Pazhwak, the Afghan ambassador to the United Nations who led the U.N. General Assembly from 1966-67. In 1972 Freyer and her husband decided to explore Afghanistan during a yearlong road trip through Europe and Asia.

They visited several countries on that trip, but only images of Afghanistan hang on the walls of her office at Skadden, Arps, Slate, Meagher & Flom, the corporate law firm where she practiced international arbitration and litigation for 32 years before retiring in 2009 to focus full time – without pay – on GPFA. (Continued access to her office is one of her retirement perks.)

Afghanistan once had old-growth forests, valley farms, fruit orchards and vineyards in vast supply. But much was lost to war. The Soviets and the Taliban cut down forests to eliminate places their enemies could hide. Over the years, most of the rest of the trees became firewood. Only 2 percent of the country is forested today.

It was that lost lushness that Freyer and her friends – including GPFA co-founder M. Ishaq Nadiri, an economist and former senior economic adviser to Afghan President Hamid Karzai – decided to try to reverse.

By early 2003, Freyer’s fledgling organizaton had formed a board, raised $150,000 from friends and family and enlisted the professional help of an Iranian-Armenian forester who specialized in poplar trees, the traditional construction wood in Afghanistan. Next stop: Afghanistan.

“To succeed in this kind of work, you have to be on the ground, and really get to know the communities,” says Freyer, a former corporate lawyer. “You have to listen to them, and respect them. And that’s what we did.”

Over many glasses of tea with an all-male council in Guldara – a district in Kabul province pummeled by war – Freyer and her colleagues negotiated GPFA’s first project.

GPFA would supply apple tree saplings to farmers and teach the farmers how to plant, tend and graft the young trees. Village “extensionists,” trainers who educate farmers, would visit regularly. Every month the farmers would pay a small amount for the value of the trees.

A year later, the apple trees were doing well. Every farmer – 60 of them working on roughly a quarter-acre each – was repaying GPFA. So the organization began an even more ambitious project with the next round of just three farmers: giving each one 8,000 poplar tree cuttings to establish poplar woodlots. An additional 16,000 cuttings were planted in a GPFA demonstration plot, bringing the total to 40,000.

After another year, each farmer repaid GPFA in poplar cuttings, which the organization then gave to the next group of farmers. The farmers used the rest to expand their farms or sell to other farmers. That process continues today.

Because the cuttings have been passed on to thousands of other farmers around Afghanistan, those 40,000 saplings, have developed into 6 million poplar trees. (Fruit trees account for the remaining 2 million new trees GPFA has helped plant.)

Around 2012, when the poplars mature, those initial woodlots will be worth about $60,000 each, an astonishing sum for people living on $2 day.

Guldara became the model. Expanding outward from Kabul province over the past seven years, GPFA has expanded considerably, operating in 425 villages in 12 provinces. Projects in five more provinces are launching this year alone.

While developing woodlot, nursery and orchard enterprises remains the centerpiece of its operations, GPFA now has a range of programs. It helps build fruit storage facilities so farmers can sell their produce in the winter, when the prices are higher. Water management is a priority, so GPFA helps create structures that catch, hold and irrigate water. The organization is expanding agribusiness options with beekeeping and farmers’ associations. At the Tree House, a training center in Guldara, farmers, students and program managers get more advanced skills.

Whatever the program, the expertise to run it is homegrown. GPFA’s 180-member staff is almost entirely Afghan.

Mohammed Hashim was the organization’s first hire. A former agriculture student and father of five from Wardak province, Hashim oversees one of the three regions where GPFA operates. “I like my work because the Afghan farmers are getting a good income from our program,” he says. His salary allows him to pay for school for his children, including his 14-year-old daughter.

The lack of female education and economic viability is well known in Afghanistan, so GPFA seeks to give women opportunities.

Fatima Sardar serves as the women’s program director. She traveled from village to village to find female employees, and today the mother of three oversees a staff of 40 women.

“During the Taliban, women weren’t allowed out of the home,” Sardar says. “When I go to the fields, and I see them earning money from our program, I am so happy. They’re not afraid, and they’re working.”

Freyer, now GPFA’s board chair, doesn’t take credit for the success stories. She says she simply combined her passion and personal history with a desire to help others.

“So many people want to do something good and make a difference for others – people who are in this stage of life who’ve had successful careers – and they don’t know where to turn,” she says. Indeed, colleagues at her law firm who are on the verge of retirement have turned to her for advice. “They say, ‘I’m comfortable. I don’t need money. What should I do?’ My advice is to think about what moves you, then go do something about it.”