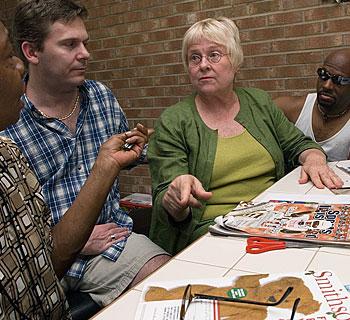 In the 1990s, HIV/AIDS treatment and services in North Carolina were largely confined to medical clinics, focused primarily on the gay community, and concentrated almost exclusively in large urban areas. Dagney Jochem, a former economic analyst and consultant who became a divinity student in her 50s, was determined to work through channels overlooked or avoided by other advocates – especially rural and minority churches in African American and Native American communities. In less than 10 years, her organization, Partners in Caring, has created a myriad of programs to meet specific needs, including a prevention program for at-risk youth, an education program to promote healthy living with HIV, and a program to train peer educators to offer support services in a community setting, just to name a few.

Jochem’s success is told in stories like Kelly Shelton’s   When Shelton moved from Hawaii to North Carolina in 2003, he had little to his name. A native of Durham, Shelton had seen his successful career as a stage performer unravel in a haze of crystal methamphetamine and unprotected sex. Infected with HIV and in declining health, he returned to his hometown with no hope and little chance of surviving more than a year.

“I was ready to die,” Shelton says. “I was sick. I was sick of people dying around me.”

Then, at an HIV/AIDS support group meeting, Shelton met Dagney Jochem, who invited him to participate in a program she’d created for people living with HIV/AIDS. The program trained peer educators to offer disease-related support services in a community setting.

During the training, Shelton witnessed a collection of sad, bitter, and terrified people rediscover a reason to live. “We flowered,” he says. “We metamorphosed. It was amazing to see the difference.”

Driven by a fresh sense of purpose and a desire to spread the word, Shelton now volunteers for Jochem and her organization, Partners in Caring (PIC), and uses his example and his skills to instill a message of health and hope in the community. “The training absolutely changed my life,” he says. “I’m a whole new person.”

That’s what Jochem works for. In 1997, after completing divinity school at age 56, she founded Partners in Caring to train clergy across the state to understand and respond to the spiritual and material needs of those infected with HIV/AIDS. Since then, she has expanded the program’s scope to meet a range of local needs. Today, PIC provides seven education, training, and outreach programs for those with HIV/AIDS.

Before Jochem arrived, HIV/AIDS treatment and services in North Carolina were largely confined to medical clinics, focused primarily on the gay community, and concentrated almost exclusively in large urban areas. Jochem was determined to work through channels overlooked or avoided by other advocates – especially rural and minority churches in African American and Native American communities – to reach thousands of people who would otherwise have fallen through the cracks. And she’s done it in a remarkably short timeframe.

From Prevention to Testing to Support

Working from cramped offices in the basement of the Duke University Medical Center, Jochem conceived and built a succession of programs, including an HIV and substance abuse prevention program for at-risk youth in rural communities, an education program to promote healthy living with HIV, and a rapid-testing program in a primary medical care setting focused on HIV, substance abuse, and hepatitis C.

Each program evolved organically as Jochem and her staff identified needs that were not being met. “Starting things is something I’ve always done,” she says. “If there’s a good idea, you go for it.”

Though the programs address distinct aspects of the HIV/AIDS crisis, the core objective is the same: to improve the mind, body, and spirit. Elevating self-esteem may seem clichéd, but for people living with HIV/AIDS, having a sense of value and purpose can mean the difference between life and death.

For those who don’t have access to top-shelf care, understanding the importance of adherence to medication schedules and a healthy lifestyle is particularly crucial. And in a state where religion is an integral part of daily life but where attitudes toward HIV/AIDS are still often hostile or uninformed, communicating spiritual acceptance is key. “It’s the Bible Belt,” Jochem says. “People care about their faith a lot.”

In a departure from most peer education and training concepts, Jochem designed her programs to be non-literacy dependent. “We’ve had people [in the programs] who are completely illiterate,” she says. “Others have graduate degrees. Our clients like it that way; that’s part of why it works.”

Thinking outside the box is a Jochem hallmark. Associates credit her with finding creative ways to overcome such government and institutional hurdles as bans on providing safe-sex education and transportation or other “incentives” to clients, proscriptions that might have stymied others.

Following the Beat of Her Own Drummer

Jochem never intended to work in the field of HIV/AIDS. Married at 19, she taught high school in the Miami area and raised three children. Despite resistance from her husband, she left teaching to attend graduate school and received an advanced degree in economics and math, which led to a career as an economic impact consultant – and a divorce. “It was a non-traditional path for women,” she says by way of explanation.

But unconventional paths and switching gears later in life are a Jochem family tradition. Jochem’s father, a Swedish immigrant who came to the United States as a child, finished college after retiring from the military at age 44, then taught math at a junior high in Florida. When he died, Jochem’s mother finished her undergraduate education and went to nursing school – in her 50s. “There was never a sense in my family that you had to stop,” she says.

A spiritual reawakening inspired Jochem to apply to Princeton Theological Seminary in the early 1990s, while in her 50s. On scholarship at Princeton, she planned to focus her energy on inner-city problems by bringing together churches and government agencies. Instead, she landed a field internship with the Hyacinth AIDS Foundation in New Jersey. Soon after, she accepted an internship and chaplain residency at Duke.

Jochem immediately saw the need for church involvement in providing services to HIV/AIDS patients in North Carolina. “Patients would come to the clinic partly because it was the only place they could get spiritual nourishment,” she says.

Bolstered by a grant from the Duke Endowment, Jochem launched a program to train clergy to work with those with HIV/AIDS. With no models to duplicate, she created a curriculum and made contacts from scratch. Despite entrenched attitudes about homosexuality, she found her target audience receptive to her message: that people living with HIV/AIDS face real problems with food, clothing, shelter, and rejection, and that they deserve the same compassion and care as any other parishioner.

Indeed, the response to PIC programs has exceeded projections. Jochem estimates that PIC has directly trained more than 500 clergy, about 600 peer educators, and more than 5,000 youths; established partnerships with more than 500 non-profit organizations and government agencies; and educated thousands of others in HIV/AIDS and substance abuse prevention strategies.

The demand continues to increase, which has spawned an ambitious expansion plan for the future. Agencies in six states – and from as far away as Tanzania – have contacted Jochem about duplicating the peer training program. In addition to geographic expansion, Jochem sees the potential for PIC’s prevention and peer education methodologies to be applied to breast cancer patients and people with auto-immune disorders or other illnesses often associated with stigma and lack of awareness.

And the impact of Jochem’s work continues to increase.

Clay Everett, a soft-spoken, bespectacled man whose PIC training has led to several rewarding community outreach jobs, credits Jochem with transforming his life. When they first met, Everett was employed part-time at a local hospital as an informal peer counselor. “The [hospital staff] were just calling me ‘the other guy who has AIDS,’ ” Everett recalls. “There was no help, no training. I just had to do it by instinct.”

After completing the PIC program, Everett says, “I became a professional. I felt better about myself, about what I was doing. I was legitimized.” Now, as an employee, he sees the impact that PIC has on people who participate in the programs. “It does people more good sometimes than the medicine they’re taking,” he says. “What we’re actually giving them is some hope.”