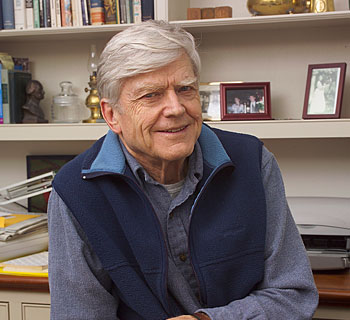 Engaging high school youth with disabilities in the world of work.

At 64, after a career in education and a record of starting programs to ensure equal educational opportunities, Charles Dey was ready for his next career. His long-time friend Alan Reich, who founded the National Organization on Disability (NOD) years earlier when an accident left him a quadriplegic, challenged Dey to “do for young people with disabilities in the 90s what you did for minorities in the 60s.”

So Dey created Start on Success, an NOD program to provide paid internships and to assign workplace mentors to predominantly minority high school students with physical, mental, and emotional disabilities. To date, more than 1,500 disabled high school students have had internships at universities, hospitals, and small businesses in five cities – and 85% have gone on to full-time jobs or further education. In addition, Dey is implementing NOD’s National Employability Partnership, which will work with corporate partners to engage the tens of millions of adults with disabilities who want to work, including wounded Army veterans returning from Iraq and Afghanistan.

Charles Dey had a career that took him from teaching history and college administration to a Peace Corps post in the Philippines and then to the top job at Choate, a prestigious boarding school in Connecticut. At age 60, he wasn’t ready to retire, but he was ready for a change.

It was the summer of 1992, and Dey was at the shore with his long-time friend Alan Reich. “You were the happiest you’ve ever been 30 years ago,” Reich told him, referring to the time when Dey ran A Better Chance, a program to help provide educational opportunities for African American students. “Now it’s time to do for young people with disabilities in the 90s what you were doing for minorities in the 60s.”

Since their days as roommates at Dartmouth, Dey and Reich had been lifelong friends. Reich had played varsity football, threw a javelin Olympic distances, then went on to debrief Soviet defectors for the CIA, worked for a multinational company, and had four children.

Sadly, at age 31, Reich had a fluke accident. He plunged from a rope swing and ended up a quadriplegic. That slowed him down but didn’t stop him. Eventually, Reich became the founding president of the National Organization on Disability.

Dey took Reich’s challenge to heart after that day on the beach. Admitting that he didn’t know anything about disabilities, Dey got busy researching the issue. He spent months talking to parents, special education teachers, and students. He learned about the 54 million Americans with disabilities – many of whom struggle to find a good job or any job at all. The problems, Dey learned, are especially critical among black and Hispanic youth with physical disabilities, learning disorders, and emotional problems.

Just over a year later, Dey founded a new National Organization on Disability program called Start on Success (SOS). The concept seemed simple enough: During the school day, high school students with disabilities would receive job-site training at nearby hospitals, universities and businesses. The students would be paid for their work. They’d receive guidance from supervisors, learning “hard” skills, such as bookkeeping, as well as “soft” skills like time management.

“Anyone who has worked in education knows that the right kind of adults can have enormous influence on young people,” Dey says. “But the adults must be there continuously, not in and out, to develop a trusting relationship.”

It looked great on paper. But, as with any new program, the learning curve was steep. Dey and his associates were continually evaluating SOS, asking themselves, “How can we do this better?” All of this contributed to SOS becoming a more-focused organization.

A single-employer model in Philadelphia emerged as the most cost-efficient and easiest to understand with the best on-site support for the students. SOS placed all the students with one employer – the University of Pennsylvania. A special education teacher from West Philadelphia’s University City High School moved her class to the University for nine months.

For its part, the University donated a classroom and found mentors among its undergrads and staff. It provided job sites as diverse as the computer center, bookstore, accounting office, hospital, daycare center, Penn Tower Hotel and the law school admission’s office.

Word got out. Soon an administrator from Baltimore asked for help starting an SOS chapter there. Dey declined, suggesting they wait until Philadelphia SOS had demonstrated it merited replication as he was still refining the SOS core elements. In his time, Dey had seen too many programs that started with good ideas but quickly became little more than vehicles for fundraising and self- promotion. He didn’t want SOS growing that way. It wouldn’t be fair to his friend Alan Reich or to the disabled young people he was trying to help.

With deep blue eyes and erect posture, Dey is 75 years old. Some of his former colleagues have gone on to golf retirements. But he keeps driving his pickup truck to SOS programs because he is a man with a mission – and 30 million or so people to serve. When he talks about his work with SOS, he constantly says “we” or “the team.” He doesn’t like first-person grandstanding.

SOS’s growth came slowly and steadily. Once Dey and his team worked out the kinks in the pilot operation at Penn, SOS expanded to five cities and jumped from just a few interns to 250. Today SOS projects work with ten universities, 11 hospitals, one community college, and dozens of small businesses ranging from an auto repair shop to health clinics to food markets.

Staff members at each SOS program have students for at least a year, hold them to high standards and coordinate schedules with their schools. Local projects also pledge to become financially self-sufficient within five years. Other than that, the programs have great autonomy.

SOS started with high school juniors and seniors; now a couple of projects allow sophomores to participate. Some offer kids a chance to come back for a second or even third year. While job placements often focus on nonprofit institutions, SOS is reaching out to private employers as well. In Pittsburgh, for example, in addition to working with the University of Pittsburgh, Carnegie Mellon and Allegheny Hospital, SOS has interns at the Cigna insurance company.

Results have been more than promising. Of the 1500 students who have enrolled as interns, about 90 percent completed their internships, and 85 percent went on to full-time jobs or further education. Without the benefit of any job training intervention, only about 30 percent of inner-city minority students with disabilities have comparable success.

People in other cities are interested in SOS, but Dey still has his foot lightly on the brakes. Dey is searching for funding for replication and visiting sites up and down the east coast to find out how they would take SOS to scale.

Dey’s voice softens when he talks about Reich, who died in November 2005. He says he hopes that his work is honoring Reich’s life and legacy.

Those who work with Dey say that his humility and tireless nature are an inspiration. “He’s one of the smartest, most personable people I’ve met,” says Claude Schrader, director of the SOS program in Philadelphia. Schrader has worked with Dey for 12 years, and he was impressed from the start by the way Dey came in eager to listen, not to tell everyone else how to do a job.

Pressed to talk about himself, Dey demurs. He says he’s proud of his team, then changes the subject. He talks about the kids he has met and the looks of satisfaction on their faces during recognition ceremonies at the end of the academic year. He talks about the mentors who tell him how much they’ve gained from the relationship.

Retirement? He laughs. His team has too much to do.