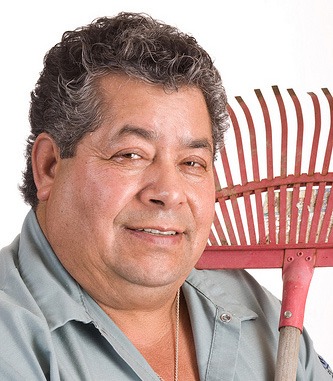 Catalino arrived in California with $6 in his pocket, built a gardening business and started a scholarship fund to seed the American dream for Latino youths.

Catalino Tapia arrived in America from Mexico at the age of 20 with six dollars in his pocket and a sixth grade education. He worked hard, eventually starting his own gardening business to support his wife and two sons. His proudest moment came when his son graduated from UC Berkeley law school. It was also pivotal. Tapia decided that more young Latinos should have the chance to reach the same heights.

He launched the Bay Area Gardeners’ Foundation, a nonprofit comprised of area gardeners that provide scholarships to low-income Latinos. Tapia and his fellow gardeners asked their employers and local businesses to donate to the fund, and they raised $250,000 in the first two years. In 2007, they awarded grants to 18 students, who were all from low-income families, had a desire to go to college, and had at least a 2.5 grade point average. Recipients also pledge to give 20 hours of community service for each year they receive scholarship funds.

Catalino Tapia was 20 when he came to the United States from Mexico, with a sixth grade education and six dollars in his pocket. He started out working in a donut shop in Redwood City and eventually started his own gardening business. But it was the day his son Noel graduated from U.C. Berkeley law school that Tapia marks as the proudest day of his life.

And one of the most pivotal. While attending his son’s graduation ceremony, Tapia felt strongly that all students should have the opportunity to attend college, and that, somehow, he could find a way to help.

According to the nonpartisan Public Policy Institute of California only 13 percent of U.S.-born Latino adults in California have a bachelor’s degree; for immigrant Latinos, the figure is 5 percent.

Tapia wanted to mobilize his community to do better. In 2006, he launched the Bay Area Gardeners Foundation, a nonprofit organization that provides $1500 scholarships to low-income students – many of whom are the first in their families to attend college. In just two years the group has raised over $250,000.

Tapia and other gardeners raise money for the scholarship fund by hosting dinners and requesting donations from local businesses and their gardening clients. Tapia, now 64, also goes in person to various businesses in Redwood City and around the Bay Area; he says he spent a recent hot afternoon walking door-to-door in his hometown to speak with Latino business owners about supporting the foundation.

Although small businesses owned by Latinos are starting up at one of the fastest rates in the country and their household income is rising rapidly, giving in the Latino community has traditionally focused on church and family. Currently, 53 percent of Latino households make charitable contributions to formal charities as opposed to 72 percent of all U.S. households.

“It’s not an easy thing to do,” Tapia says, “to make people believe in you and say ‘here’s my money,’ but we’ve been fortunate to do that, and I think we’re on the right track to accomplish many more things.”

Claudia Lopez, a 22-year-old San Francisco State University sociology and Spanish major who received a scholarship from the foundation last year, now works part-time for the organization as its only paid employee, interacting with scholarship students and doing some accounting. She is the first person in her family to attend college and will study abroad at the University of Granada in Spain this fall.

“Catalino has given so much of himself to the foundation,” she says. “He may have not gone far in education, but he has gone far in life.”

Lopez, who is from the low-income, east side of Menlo Park, plans to get a master’s in education and public policy and work in the nonprofit sector. Her parents, who are Mexican immigrants with elementary school educations, raised their three children on about $30,000 a year.

“My family supports me emotionally, but they just don’t have much money. They are so proud that I graduated high school and pursued their dream and my dream.” she says.

Catalino Tapia had dreams of his own. He grew up in a large family and says when his father died, his two older brothers took over, and the family declined. He realized he wanted to create a better life for himself and slipped over the border to make his way up the California coast.

Tapia says that in those early years he was so focused on building his business and raising his children, he didn’t have time to think about starting a scholarship fund, though he always realized a need was there.

During a long drive to Los Angeles to visit his son in 2002, his wife fell asleep and he started really thinking about his idea. Although it had been on his mind for years, he wasn’t sure how to begin, until he wondered if his gardening clients would be interested in donating money to a scholarship fund for low-income students. Noel helped him set up a nonprofit organization and the project was born.

“We had to do this,” he says on a hot summer afternoon at his home in Redwood City where he lives with his wife, Margarita. “Somebody needs to do something.”

Tapia says the foundation took a year-and-a-half to get organized, but, when he approached his clients for donations, he raised $10,000 in two weeks. He called other gardeners to help and now has about a dozen colleagues on the board. When the foundation raised $45,000 in funds, he decided it was time to start sponsoring students.

The foundation’s motto is “Con becas formaremos un mejor futuro” (with scholarships we’ll form a better future). During its first year, in 2006, the organization provided scholarships to five students; in 2007 it doubled that number; in 2008, 18 students were awarded grants; and in 2009, Tapia estimates as many as 25 students will receive scholarships.

Applicant criteria are fairly simple: applicants must be from low-income families; they must have a minimum 2.5 grade point average; a desire to continue their education beyond high school; and they must commit to 20 hours of community service for the year they receive the scholarship.

“I think it’s very important for them to learn [through community service], so that they can do something similar in the future,” Tapia says. “The idea is, ‘we can help you, but you need to give back someday.'”

Scholarship recipients need not be legal immigrants to receive aid. Tapia says young people should not have doors closed to them because of their immigration status.

In a way, Tapia’s years of gardening experience have prepared him for helping students. In both cases, he is called upon to nurture, and he does so with quiet passion and pride. He’s also been inspired to pursue his own education; when he retires, he plans to take classes to get his high school diploma.

Tapia says he would love to expand the program outside of California. For the time being, however, he is focused on building his funding base and reaching out to more students.

But the dream is there.