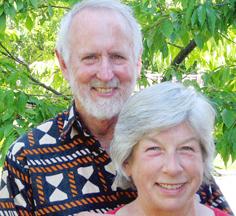 Ristow and Morrow train journalists in emerging democracies in the skills they need to fulfill their essential role as independent watchdogs for the people.

After decades working as journalists in Seattle, husband and wife Bill Ristow and Theresa Morrow were looking for a new purpose. Their five children were grown, and their parents had passed away.

“For the first time in our lives, we didn’t have responsibilities to determine our future,” Ristow says. “We began to look for opportunities that would allow us to pass on the knowledge we had accumulated, most of it in journalism.”

As a result, in 2007 the two launched a joint encore career training journalists in Uganda. Funded by an Knight International Journalism Fellowship, for nine months Ristow trained the staff of the Kampala daily New Vision and three local weeklies in the essentials of reporting, writing, and editing.

Since then, the two have trained more than 1,000 journalists in Uganda, Kenya, Ethiopia, Ghana, Bosnia and Herzegovina, and Ukraine from editors in chief of major daily newspapers to freelance journalists in remote rural villages who make less than $2 for a story. While the journalism-school basics are important, the couple says the foundation of their training is independent thinking, and persuading these journalists to write to the electorate, not to the political candidates, to their readers, not to government officials.

“It has not always been easy. We have lived in places with scorpions in the bathtub and missed major events in the lives of our children and grandchildren,” Ristow says of their encore calling. “But when we read honest stories about what a poor farmer with no shoes thinks about an upcoming election in Tamale, or what an illiterate woman in Lira has to say about how the government cheated her out of medicine for her children, we know we have made the right choice.”