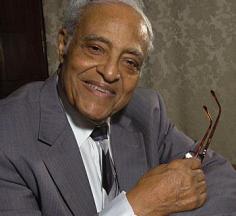 Near the end of his tenure as head of the NAACP, Ben Hooks saw that the battle for legal access to voting, education, and employment had largely been won. He wanted to work on the next battleground – the health and environmental inequalities that impact minorities just as surely as these earlier challenges.

Working with Jack Kemp, former Secretary of Housing and Urban Development, Hooks founded the Children’s Health Forum and selected lead poisoning — considered the most preventable environmental health hazard facing children today — as its focus. Hooks and Kemp worked with Congress to secure a $50 million appropriation for use in communities with the highest incidence of childhood lead poisoning, an amount that has since reached $200 million. One example of the group’s success: The number of children in St. Louis with elevated blood levels decreased by 39% over four years, and the number of housing units designated “Lead Safe” nearly quadrupled.

On a hot day in Memphis, the screened balcony of Benjamin Hooks’ home seems a perfect place to have an iced tea and watch the brown Mississippi River flow by. But the 81-year-old attorney and legendary civil rights pioneer has other things on his mind.

In his kitchen, Hooks is consulting with the deputy director of his nonprofit, who has flown in from Washington to show him a letter she’s drafting to the Environmental Protection Agency. Meanwhile, in the main room (which has been transformed into a huge office), his wife Francis Hooks and an assistant shuffle through stacks of paper.

“There has never been a time in my life where I haven’t been doing eight or nine things,” says Hooks, who has campaigned for civil rights with Martin Luther King, served as the head of the NAACP for 15 years, and was the first African American appointed to the Federal Communications Commission.

“I decided I would deal with lead poisoning because, according to the CDC, it should be able to be wiped out within ten years,” Hooks says. “Also, the interest in eradicating it was dying.” Hooks believed he could bring that interest back to life.

Near the end of his tenure at the NAACP, Hooks saw that the battle for “hard” civil rights — legal access to voting, education, and employment — had largely been won. He wanted to work on “soft” civil rights — health and environmental inequalities that impact minorities just as surely as those earlier challenges.

Lead was the obvious choice

Lead poisoning most commonly affects children under six, whose smaller bodies absorb lead more readily than adults. They often take in the metal through powdering lead paint around windows or lead paint chips, which taste sweet. Childhood or fetal exposure to lead can cause lowered IQ, short-term memory loss, reading and math disability, and hyperactivity.

One of the first things Hooks did as chair of the Children’s Health Forum board was to bring a new approach to Congress. He and Secretary Kemp worked with Senators Barbara Mikulski and Christopher Bond to create the HUD Lead Hazard Reduction Demonstration Grant program — a $50 million award program that has been renewed four times and has already sent $150 million to the most at-risk cities and counties in the country; another round of $50 million is currently available to eligible communities. CHF conducts outreach to these communities each spring, informing them of the existence of funding and encouraging them to take advantage of the resources.

Getting the Job Done

Rebecca Morley, executive director of the National Center for Healthy Housing, a prominent lead eradication organization, says, “What Dr. Hooks and CHF bring is a high-powered board that actually is able to get things done in Washington and add value in terms of the prominence of the ideas.” With $5,000 from CHF, Morley’s group was able to finish rehabilitating a home-based daycare center in Syracuse, New York.

These days, Hooks works strategically, using his reputation and influence to secure important meetings or place editorials while leaving the daily work to a staff of one full-time employee and one part-timer.

But he isn’t averse to sometimes taking a more hands-on approach. At a conference three years ago, newly elected St. Louis Mayor Francis Slay, who was struggling with his city’s lead problem, found himself fortuitously seated next to Hooks. Soon after, Hooks met with Slay in St. Louis and took down the names of the dozen conflicting groups that were all arguing about how to confront the lead problem.

“He spent most of a year coming in and out of St. Louis and he met with every one of those groups,” recalls Richard Callow, Mayor Slay’s political communications director. “He also sat down with the editorial staff of the paper and said, ‘Here’s how you might talk about this issue.’ He really presented a new way of talking about it.”

Callow says Hooks was able to build bridges and relationships among groups, who, left to themselves, would never have been able to agree on how to spend the money. “All I know is he would walk into a room with a determined look on his face and 12 people would walk in with him and they’d walk out and he’d have a signed agreement,” says Callow. “He’s very focused.”

Growing up in segregated Memphis, Hooks never dreamed he would become a dealmaker. Instead, he was an aspiring minister. “When I was a boy, I would preach to ducks, chickens, and turtles,” recalls Hooks. “Sometimes I made my sisters sit there and listen for one hour. That’s what little boys did then.”

But try as he might, Hooks could never gather up the nerve to speak above the poultry and little sister level. Facing serious self-doubt, he enrolled in law school, but could still hardly get a word out. As a salutatorian, he cried through his four-page delivery, leaving the papers damp as a dishrag. It wasn’t until he was invited to give a lay sermon in his mid 20’s that Hooks overcame his fear. “I was about to break out into tears again, but I got up to the pulpit and have not been nervous since.”

Today, his oratorical skills are legendary. And indeed the rise and fall of his voice as he recites long passages from Shakespeare by memory seem to have more in common with the drama and emotional resonance of opera than anything so mundane as common speech.

Hooks eventually became a pastor and still delivers weekly sermons at the Greater Middle Baptist Church in Memphis. He’s chair of the National Civil Rights Museum; an attorney with Wyatt, Tarrant, and Combs law firm in Memphis; and an advisor for the NAACP.

And activity at CHF is ramping up. As part of an agreement with the state of Rhode Island, Dupont agreed to spend about $10 million rehabilitating at least 600 lead-contaminated homes in the state. The money will be held and administered by CHF and funneled to different state programs over a five-year period.

At age 81 and with some health concerns, Hooks acknowledges slowing down a bit. But as he breaks into a soaring rendition of a Rudyard Kipling poem, somehow, even in this sleepy corner of Memphis, Benjamin Hooks shows he is still at the center of it all.