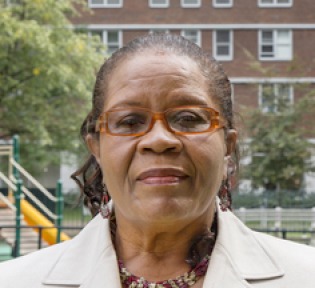 When Barbara Young courageously transformed herself from immigrant nanny into passionate advocate, she launched an encore career with the power to change the lives of domestic workers across the United States.

In 2001, when Barbara Young signed up for a nanny training class in New York City, she didn’t realize how it would set her on the path for her encore career. She simply thought taking a certificate program could help her acquire extra skills, like CPR. She took pride in her work looking after a six-week-old baby round the clock, and was thirsty for knowledge. “I figured it would be really good for me,” Young says.

After emigrating from Barbados, Young had found a job common to many immigrant women: taking care of someone else’s child. She’d already raised five kids of her own. By the time she signed up for the class, offered by Domestic Workers United (DWU), she had been working as a nanny for eight years. Her job involved caring for a child she adored. But it also demanded long hours for low pay and no benefits.

The class turned out to be about more than CPR. After practical instruction in child psychology, discipline and first aid, the instructors enlightened the women about the history of domestic work. Young learned it had long been debased as “women’s work and unpaid labor” and had roots in slavery. There were few labor laws on the books to protect domestic workers.

In that moment, Young decided she wanted to change the way domestic workers viewed themselves—and elevate their role in the workforce. “If the work you are doing is lifting up and enhancing the life of another person, then that work has value,” Young says. “This is the work that domestic workers do, day in and day out.”

She signed up as a volunteer with DWU. For the next 10 years, while still working as a nanny, she organized and mobilized her fellow nannies to join the movement. In 2010, she finally left 17 years of childcare behind for her encore career: as a national organizer with the National Domestic Workers Alliance (NDWA), of which DWU is a member.

Since then, Young, 66, has become a leader in the movement. She’s encouraged thousands to stand up for their right to earn a livable wage, and counsels and trains others to become leaders themselves. She was essential in the push to get New York’s Domestic Workers’ Bill of Rights passed in 2010. The law is the first of its kind in the country, but Young is committed to making sure it isn’t the last.

She’s also been a key player in the NDWA’s expansion from 11 to 44 affiliated organizations with 15,000 members, up from 5,000 in 2007. Young’s goal is to increase membership by more than tenfold.

If she succeeds, NDWA will still represent only a small fraction of the domestic workers thought to be in the United States. Firm numbers are hard to come by, but the NDWA estimates there are about 2 million.

Young knows their struggles intimately. After she emigrated in 1993, her first position as a live-in domestic worker paid $225 dollars a week for 12-hour days and zero benefits. Her life in the Caribbean had been much different. She had been a bus conductor for 20 years—a position that came with benefits, overtime and paid vacation. She also solved disputes between workers and management, a skill that would later come in handy as an organizer.

After she attended the certification class, she knew she deserved more, and so did others like her.

Every day she stuffed her handbag with union flyers and handed them out to nannies wherever she went: the playground, the bus, the library. Hearing their stories enraged her. When their kids headed to college, employers dismissed nannies after 20 years of service without any retirement benefits. Other nannies were told they couldn’t take Thanksgiving or July 4th off because they were “American” holidays. One nanny broke her ankle after being accidently locked in the basement at work.

“I wanted every domestic worker that I meet on the street to know about DWU,” she recalls, “and to know that there were circumstances that caused the job to be the way it was.”

Young quickly rose through the ranks of DWU. She became a board and steering committee member. Her efforts to organize domestic workers and partner with other grassroots organizations impressed leaders at NDWA, the national alliance. She was confident she could expand her outreach efforts on a bigger scale and grow the NDWA nationally.

It was her passionate rallying of domestic workers in New York State in support of groundbreaking legislation that convinced NDWA leadership she was right.

In 2004, Young began building a movement to back the Domestic Workers’ Bill of Rights, which would make overtime, paid time off and rest days mandatory in the state. It wasn’t easy. State legislators in Albany kept confusing domestic work with domestic violence. Young explained to them that while some domestic workers are the victims of violence, “we are talking about people who work in other people’s homes and who are excluded from major labor laws in this country,” she recalls.

For the next six years, Young developed innovative campaigns to catch lawmakers’ attention. One tactic included locating domestic workers employed in representatives’ districts and bussing them to Albany so they could describe their lives and work conditions directly to legislators. Young was often the lead person representing domestic workers in meetings with policymakers. And she was also part of the leadership team that helped clarified which protections and demands should be included in the bill.

In 2009, she heard then Governor David Patterson say on the radio that he’d sign the bill if it made it to his desk. It provided the boost of confidence she needed to keep pushing. The bill finally passed in 2010.

“She understood,” says Joycelyn Gill-Campbell, an organizer and outreach coordinator at DWU. Young “connected to the issues and knew what it was like to be abused because she suffered abuse from an employer.”

Young is keeping her eye on states like California and Massachusetts, which are considering similar bills.

She’s also advocating for a higher federal minimum wage and for women to have a role in the heated congressional debate about immigration reform. “There were eight men putting this immigration bill together. There was no voice of a woman in there,” says Young. She aims to make sure the voices of women—especially immigrant women of color—are heard by writing letters on their behalf to the Senate committee in charge of reform and by traveling to D.C. to attend sessions hosted by the Department of Labor.

Young’s next major campaign, funded in part by Ford Foundation, is Caring Across Generations. “It’s an effort to support seniors like me to receive the support we need to age in our homes and communities, while improving the home care jobs that make that possible,” she says. “I know from experience how undervalued care work is, I believe this campaign is a key to a better future for all of us.” More than 200 organizations, including major national unions like AFL-CIO and SEIU, are involved.

Yet teaching domestic workers about their rights remains the heart of her encore career.

“She empowered me,” says Pat François, a nanny who worked in a verbally and physically abusive household for more than six years in New York. Young helped François file a lawsuit after her former employer shouted racial slurs and punched François in the face.

François won. “She helped me to be stronger, to stand up for and fight for my rights,” François says. “She was instrumental.”

Empowering women like François has given Young an encore career filled with meaning and purpose. “I look at it all and I see it as a blessing,” she says. “People say to me, when are you going to retire? And I am like, ‘How can I retire when the work is not finished?’”