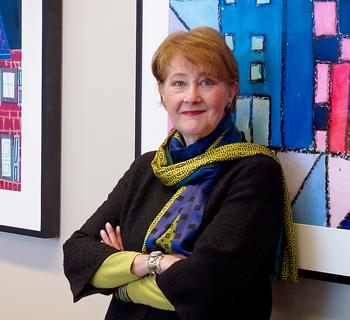 Allen engages children as philanthropists to create artwork that brings in donations that pay for desperately needed art supplies for inner-city Philadelphia schools.

When he was 13, Michael Clarkson’s mother was arrested, and he was sent from Arizona to Philadelphia to live with other family. No surprise, Clarkson began having a tough time in school and had no plans for his future.

When Clarkson was in the 11th grade, Allen saw a piece of his artwork – an oil crayon drawing depicting a fish amid colorful geometrical patterns – and was impressed. She had a plan, she told him, to display the drawing while raising money for future paintings by undiscovered art students.

To make it happen, Allen asked Michael to donate his artwork to Fresh Artists, her nonprofit working to bring art supplies to underfunded Philadelphia public schools. The organization made a high-resolution digital photograph of Clarkson’s drawing and turned it into a large-format print measuring 6 feet by 9 feet. Allen hung the piece in the corporate office of Health Partners, a local health maintenance organization, as a thank you for the corporation’s donation to the nonprofit.

“When my artwork was accepted by Fresh Artists, everything made a giant 180,” says Clarkson, now a carpentry student at the Williamson Free School of Mechanical Trades in nearby Media, Pa. “It helped me realize I could do good in life and become somebody.”

Since Allen founded Fresh Artists in 2008, the nonprofit has installed 587 large-format reproductions of children’s artwork and donated art supplies worth more than $100,000 to 272 Philadelphia public schools, reaching more than 53,400 children.

Here’s how Fresh Artists works: Children from kindergarten to 12th grade are invited to donate the use of their artwork through a license allowing Fresh Artists to reproduce and distribute images of the pieces. (The children keep the original art.) Then, when corporations, businesses, individuals or other organizations make donations to Fresh Artists, those donors may choose large-scale reproduction images. A plaque beside each piece of art credits the artist and explains Fresh Artists’ concept.

It’s all part of Allen’s vision of lateral philanthropy: enlisting children as partners in raising funds to help other children create new works of art. Fresh Artists’ collection includes artwork from 389 children who typically would have little reason to enter a corporate office building – much less see their artwork displayed there.

“If the bar is set low for poor children, they will trip over it,” says Allen. “If you raise the bar high, they will sail over it. At Fresh Artists, we believe art is a lifeline for children in the inner city.”

For the past several years, Philadelphia public schools allotted 83 cents per child for a year of art supplies. This year, that allotment was discontinued.

Teachers either spend hundreds of dollars of their own money for supplies or do without. Allen first encountered this pressing need when her son Roger left a suburban private school to enroll in an urban charter. She followed him, first as a volunteer, then as development director.

Before leaving paid work to raise her two sons, Allen had built a career as an administrator at major art museums, including the Philadelphia Museum of Art and Harvard University’s Peabody Museum. So when she left the charter school after seven years, it wasn’t too big a leap to tackle the challenge of filling the walls of the new Philadelphia school district headquarters, an 850,000-square-foot former printing plant.

Allen enlisted her son Roger’s help. Looking at their minuscule budget, they came up with the idea to take digital images of donated children’s artwork and blow them up. Over the next two years, as they installed hundreds of pieces of art, they kept hearing from passersby who wanted to buy the artwork. Fresh Artists was born.

Allen’s background gave her the skills to build a new kind of nonprofit. Her age gave her the confidence to do something different without fear of failure. “This was a pulling together of all the threads of my life, the entrepreneurial, the collections management, the aesthetic,” Allen says. “I’ve decided that for what’s left of my life, this is what I want to be doing.”

Fresh Artists has been particularly successful in a tight economy. When corporations, retail establishments or other organizations make donations to Fresh Artists, they save money decorating their buildings while contributing to the community.

“It would be very awkward for us to spend money buying expensive original art,” says Bill George, chief executive of Health Partners. Using Fresh Artists “was decorating but also giving to a good cause.”

Allen’s love of vivid colors comes through in Fresh Artists’ collection, which she has hand picked: giant multicolored flowers and fish, geometric cityscapes, still lifes and self-portraits that pop off the print.

When Sara Hendrix, 19, saw her portrait of herself as a baby, enlarged on the walls of Shire Pharmaceuticals’ office, “I felt famous, to be honest.” So many children in her neighborhood are on the wrong path: uninterested in school and getting only negative messages about their capabilities, Hendrix says. “To hear something different, it makes them feel like somebody. For Ms. Allen to come in and see a picture, and the way she makes the student feel about the picture – sometimes that’s all a child needs.”

Allen is continually coming up with new projects for Fresh Artists. With Robyn Miller, a teacher at Hancock Elementary School, Fresh Artists transformed an after-school art club into “Sign Studio,” in which third- to fifth-graders take on commissions from clients such as the Weavers Way cooperative grocery store, which wanted brightly hued paper mosaics of fruits and vegetables to brighten up the produce section.

“Barbara gets ideas, and it’s not just an idea that stays an idea. She always makes it happen,” says Miller, who – like many who know Allen – describe her as passionate and persuasive. “Everything she’s doing is infectious.”

Since its inception, Fresh Artists has raised $192,150 from foundations and $135,485 from corporations and individuals. Allen doesn’t take a salary, although the nonprofit does pay her health insurance. In five to seven years, she’d like to hire a full-time executive director and become a board member who trains and mentors teenagers in a Fresh Artists apprentice program.

By bringing children who are typically invisible into the “spaces of success,” Allen says she begins a conversation with powerful decision-makers, encouraging them to support public education beyond art class.

“We are going sneaky-smart under the tent of corporate America,” she says. “After a number of years when we have Fresh Artists’ work throughout corporate America, it will begin to change the way we fund public education, the way we regard the most vulnerable members of our society.”