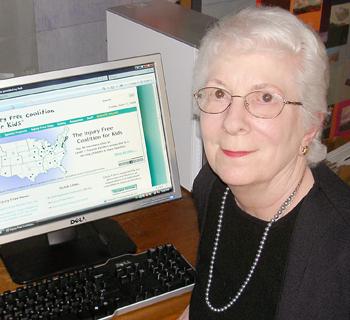 Pediatric surgeon Dr. Barbara Barlow went to work at Harlem Hospital in 1975, eager to serve children who had little hope for surgical care because of limited ability to pay. She was appalled at the fatal injuries she saw that were easily preventable – burns, fractures, cuts and broken bones. She wanted to go beyond caring for children after they were injured, she wanted to prevent the damage before it happened. Dr. Barlow, at age 60, created the Injury Free Coalition for Kids, a national network of physicians at children’s trauma centers nationwide, to work with community stakeholders and local governments to create safer environments for children and their families, like safe playgrounds and green spaces. The Harlem program supported a New York City law requiring guard bars on apartment windows to prevent falls, and started programs to educate parents, school authorities and government officials on child safety. Child injuries treated at Harlem Hospital have dropped 60 percent since the program began, and other participating trauma centers report similar success. For every dollar spent, four dollars are saved in health care cost. Inspired by Dr. Barlow, leading medical schools and hospitals have committed resources to a new field called Injury Prevention, and the work is expanding to cover teen driving, obesity education and injuries to seniors. “I must not hang up my hat until I see that the work will continue and that children will be saved from the scourge of injury, needless injury, which can be prevented.”