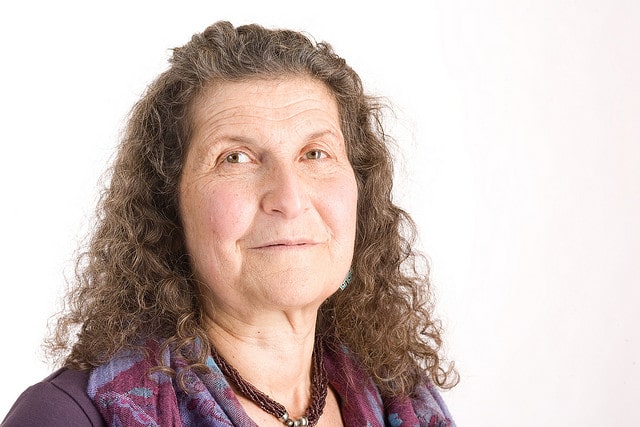 In the 1970s, Arlene Blum led the first women’s mountain-climbing teams up the icy slopes of Denali and Annapurna. She still leads Himalayan treks, and she’s also ascending the steps of the state capitol to reduce toxic chemicals in consumer products. Blum has come full circle to her 1970s success as a UC Berkeley chemist, when her research helped remove Tris, a toxic fire-retardant, from children’s sleepwear. After her cat rapidly lost weight and was diagnosed with a thyroid disease, Blum discovered high levels fire-retardants from her couch in her cat – and found herself again battling Tris and its chemical cousins in consumer products.

Blum says she is climbing her highest summit yet, working to bring all sides to the table for policies and regulations that protect human and environmental health. Her approach led to a recent victory that kept 1.7 billion pounds of chemicals out of electronic equipment made worldwide, and she is pressing California regulators to reduce toxic fire-retardant chemicals in furniture and children’s products in that state. Meanwhile, her Green Science Policy Institute is a new model for engaging industry, scientists, governments and nonprofits in mutually beneficial research to support healthy communities.

People with expertise in more than one arena typically make logical pairings, such as politics and government, adolescents and drug abuse or hunger and poverty. But Arlene Blum combines world-class knowledge of toxic chemicals in our homes with a deep understanding of the icy slopes of Mount Everest. At 63, she is using her expertise as an adventure travel trip leader to finance her current mission in life: reducing the use of chemicals that threaten human health and the global environment.

In the 1970s, as a researcher at the University of California at Berkeley, Blum learned that a fire retardant known as tris damaged DNA and was absorbed into children’s bodies from their sleepwear, Her research and a lead article she wrote for the respected journal Science led to a ban of tris from children’s sleepwear in 1977.

Then, for decades, Blum put her science aside, moving to mountaineering, motherhood, and corporate leadership training. Having been deputy leader of the first all-woman team to ascend Mt. McKinley, America’s highest peak, and the first American woman to attempt to climb Mt. Everest, Blum led mountain expeditions in the Himalayas and other ranges worldwide.

In 1978, Blum led a team of 13 women in attempting Annapurna in Nepal, considered the most dangerous and difficult of the Himalayan giants. The team succeeded in making the first American ascent; but, tragically, the two women in the second summit team fell to their deaths. Blum’s book about this triumph and tragedy has become a classic in mountaineering literature and inspired many women and men “to climb their own Annapurnas.”

It was her cat, of all things, that led her back to working to reduce toxins, this time in furniture. In 2006, Midnight had lost eight of her 14 pounds and was diagnosed with hyperthyroidism; Blum found that the cat’s blood and her household dust both contained very high levels of fire-retardant chemicals.

She learned that such chemicals can migrate from household products into dust, the soil, rivers and the food chain, and can cause health problems such as cancer, reproductive, neurological, thyroid, and endocrine disorders. Most mothers’ milk contains fire retardant chemicals, and even polar bears have high levels of toxic chemicals from California furniture.

Blum’s op-ed drawing attention to the toxics in the nation’s furniture was published in The New York Times, and a letter in Science informed the scientific community of the hazards of such chemicals. “The real problem is that the U.S. regulatory system for toxic industrial chemicals is not effective and is a threat to public health,” says Donald Kennedy, editor of Science and a former Food and Drug Administration commissioner. Blum’s work, he says, is “an extraordinary sequel to the tris story.”

Blum’s mission now, she says, is to continue to reduce toxic chemicals in our homes. More than 80,000 industrial chemicals “are all around us — in our cleaning products, our cosmetics, our furniture, televisions, and computers,” and regulators do not have the authority to require the health information needed to protect us from their toxic effects, she says. “They can migrate out of products and be ingested or absorbed into our pets, our bodies and, worst of all, our children’s bodies.

“The health and environmental problem from such chemicals could be as threatening as climate change, but I believe it is a problem that can be solved relatively easily,” Blum continues. “It’s a matter of informing the public – and political will.”

Blum has partnered with Friends of the Earth, MOMS (Making Our Milk Safe) and MomsRising to support California Assemblyman Mark Leno’s AB 706 (introduced in 2008), which would have stopped the flow of toxic furniture into California homes. Her work with a Tufts economist shows that revised fire-retardant requirements for furniture would be more than paid for by better human health.

She also wrote a white paper and mobilized scientists, fire fighters and nonprofit organizations worldwide to persuade the International Electrotechnical Commission to reject a flammability standard that would have led to potentially toxic fire retardants in the plastic enclosures of televisions, computers, and other electronic equipment. This victory has kept 1.7 billion pounds of the chemicals out of homes and the global environment.

“It’s hard to turn organizations and people on a dime.” says Sara Schedler of Friends of the Earth. “She did it.” She called Blum “one of the most remarkable scientists I’ve ever met. She just lives and breathes her care for the world, and she has the background to translate science for policymakers, legislators, and the general public.”

Blum worked with Joan Blades, cofounder of the online groups MoveOn.org and MomsRising.org, to change a federal bill that would have led to fire retardants in toys. “We would never have been able to do it without Arlene,” Blades says. “She’s taken her perseverance as a mountain climber and she’s applied it to other issues. This is absolutely crucial work.”

Blum does most of her work from her book-strewn California home. Three interns help with research, writing, and maintaining a growing database on toxic chemicals and their effects. Outside her door is a mini-field of miniature wildflowers and in the front is an old hammock. But she is too busy to use the hammock much.

Blum still leads treks in the Himalayas to support her budding Green Science Policy Institute, which she plans to make into “an environmental rudder for industry.” It provides research about chemical effects and education about toxicology, “green chemistry,” and ways for industry to move toward sustainability and still make profits. She works with scientists, business and government people, and nongovernmental organizations in Canada, Europe, and around the world.

“With a global and virtual expedition team, we are attempting challenging and important mountains,” she says, “and reaching for the summit of a healthier world to benefit us all.”