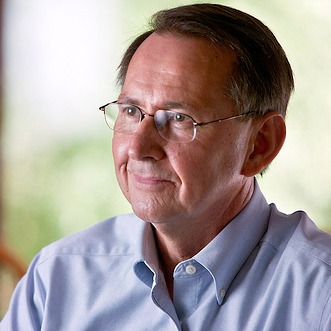 Once homeless, Barsema creates innovative online networks of social service agencies to ensure that people in need get the help they require quickly, efficiently and effectively.

Allan Barsema was working in the office of his construction company one afternoon when he heard a series of loud thuds. Outside, a homeless man was screaming and throwing himself against the door.

A neighborhood coffee shop that had allowed street people to hang out had recently closed, and without that simple haven, the man had become despondent. Barsema recognized himself in the disheveled, drunk man. Ten years earlier, Barsema’s alcoholism had cost him his marriage, house and real estate business.

At the time, Barsema’s parents took him back into their home, and with their support, Barsema stayed sober, launched a construction company and remarried. Barsema felt lucky – others in despair didn’t have a stable family to turn to for help.

So in the summer of 2000, Barsema set aside a room at his company as a meeting place for the area’s homeless. Eight people drifted in that first day for coffee and donuts. At the end of the year, Barsema shuttered his construction business and devoted himself full time to what had become an outreach center. He called it Carpenter’s Place.

Since then, Barsema has gone on to develop an innovative online system to coordinate services for the homeless throughout Rockford, Ill., about 80 miles northwest of Chicago. Agencies can collaboratively guide homeless people as the individuals access various services, from health care to housing. The model, which allows agencies to work together more efficiently and seamlessly, has been adopted in various other communities in several states.

Serving the homeless “gave me this inner drive that wouldn’t let go,” says Barsema. “I couldn’t go back to just construction. It was nothing of real lasting value. If I could help someone, that was of lasting value.”

Debbie, who asked that her last name not be used, credits Carpenter’s Place for giving her the foundation to move from the streets to the classroom. A long history of physical and sexual abuse shattered her self-esteem and drove her to a nervous breakdown. While living in a homeless shelter two years ago, in her mid-40s, she began meeting with caseworkers at Carpenter’s Place. The staff moved her into transitional housing operated by the center and directed her to a health clinic, plus several other services.

The former truck driver is now studying business administration and working in a human resources office at a local college. “I couldn’t have done it without them,” she says, her voice choking up with emotion. “I felt safe there. They didn’t judge me. They said, ‘We’ll help you all we can as long as you help yourself.’”

Every day, nearly 100 people visit Carpenter’s Place, located in an industrial, crime-ridden section of Rockford. The center, decorated with murals and other artwork made by guests, offers storage lockers, showers, laundry services, social programs and the personalized professional case management methods it developed to assess and address diverse areas of life.

Accountability is a key component. Guests must adhere to the plans they agree on with their case managers. Plans may include performing community service to remain eligible for the extra services Carpenter’s Place provides, such as laundry and storage. Case managers are also accountable. For example, if a case manager fails to order a guest’s high school transcript when that’s part of the guest’s plan, the employee is subject to further coaching, training and possibly disciplinary action.

Without accountability, Barsema says, “We would just be perpetuating the old models of passing out stuff.”

Last year, Carpenter’s Place reported helping 321 guests transition into housing, 114 secure jobs and 99 complete job training. Barsema estimates that up to 10,000 people have sought haven at the center in its 10 years.

During that time, Carpenter’s Place has been a family affair. Barsema’s wife, Cathy, quit her job as a nurse and is now director of guest services for Carpenter’s Place. (She is part of the organization’s current paid staff of 17.) Barsema’s brother and sister-in-law, who supplied startup funds, serve on the board, and his mother does volunteer office work.

To Barsema, a community’s social services should be like a family – different parts working together. Soon after starting the center, he realized how much more agencies like Carpenter’s Place could do if they were connected to other agencies.

Under the typical social services model, people bounce from agency to agency – soup kitchens, addiction rehab centers, health clinics. The client doesn’t have a plan to get out of homelessness and, instead, spins in a cycle of dependency. Often, the agencies don’t talk to each other or realize that they may be working at cross purposes. Barsema says that he once drove a man to a mental health center only to be told that services couldn’t be provided until the man stopped drinking. But the man kept dropping out of rehab because of his mental health problems.

“Nobody’s going to go hungry in Rockford,” Barsema says. “There are beds; there’s free medical help. As a community, we have all the resources we need to help someone. We just need to coordinate them more effectively.”

Agencies in Rockford had talked for years about creating a network, Barsema says, but nobody had time to devote to the effort. Some were wary that building a collaborative could mean less funding for each agency. Barsema, however, persisted. As he developed the software and computer system, with the help of programmers from Northern Illinois University, he met with agency representatives to get their input and advice and to win support.

In 2006, the system was launched. Now more than two dozen social service agencies in the Rockford area are linked. Clients sign a waiver allowing their personal information to be entered into a central database.

Case managers can now look up a client’s record rather than having the person repeatedly recount his or her history or having to call and email other agencies to track down information. The time saved allows case managers to devote more time to helping clients.

“I was so impressed when I first met Al that he could see past doing things the way we’ve always done them,” says Cheryl Rogers, the outgoing executive director of Shelter Care Ministries, which helps families find housing.

To replicate the network elsewhere Barsema formed a new nonprofit, Community Collaboration Inc. More than 140 social service agencies in five states have adopted Barsema’s methodologies and database tools, serving more than 80,000 people nationally. Arrangements with agencies in roughly 20 more states are in the works. Community Collaboration Inc. was recently acquired by SupplyCore and operates as MPOWR

Barsema has continued to refine the technology and models, joining the staff of Northern Illinois University in 2008 as a senior research associate in the school’s Center for Governmental Studies. In 2010, Harvard University’s John F. Kennedy School of Government recognized the work of Community Collaboration Inc. for addressing social issues in innovative ways.

Barsema is now focusing on ways to mobilize and coordinate church-based resources in a community’s social service network through a new entity called One Body Collaboratives.

As his work expands, Barsema continues to be reminded of its beginnings. Several of Carpenter’s Place’s first guests still keep in touch. Clark, who once lived in the woods, fondly remembers how Barsema brought him cans of food. Even while in prison for a parole violation, Clark sent $1 donations to Carpenter’s Place every month.

And there’s Shari, who Barsema affectionately nicknamed “Lizard Lady” because of her fondness for reptiles. She’s now in school studying to become a medical assistant and contributes to the Carpenter’s Place newsletter.

“These are the kinds of things that really mean something,” Barsema says. His eyes mist over, and he falls silent.