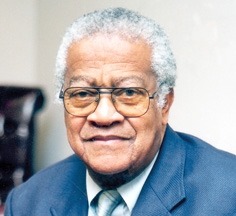 In 1995, after a decades-long career in public health that included managing Mississippi’s largest community health center, Aaron Shirley hatched a new plan for improving the lives of low-income residents of Jackson, Miss. Shirley partnered with the University of Mississippi Medical Center, Tougaloo College and Jackson State University to convert a largely abandoned mall into the Jackson Medical Mall, the only facility of its kind in America to provide quality health care, human services and retail in one place. The innovative mall has also revitalized the neighborhood’s economic, education and community development.

In 1965, Shirley became the first African-American to take a pediatrics residency at the University of Mississippi. Later he pioneered an approach to rural and urban health care that included school-based clinics for adolescent care. Those clinics are now a national model for communities looking to reduce teen pregnancy, violence, drug abuse, sexually transmitted diseases and mental health issues. For this work and more, in 1993 Shirley won a MacArthur Fellowship, commonly called a “genius award.”

In 2010, Shirley began collaborating with an Iranian-American colleague at Jackson State University to adapt an approach to community health that has proven successful in Iran. In the Iranian Community Health Houses model, medical experts conduct door-to-door visits in underserved communities. Shirley sees this tactic as a way to expand health care to other declining neighborhoods.

Jackson Medical Mall is a natural outgrowth of his desire to improve his community. “It was an extension of the work and commitment that has been ongoing throughout my professional career,” he says.