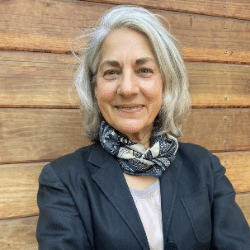 Get the latest Encore.org news, resources and opportunities.

As an accountant with PWC over 20 years ago, JACCC was one of her first clients. She joined the organization as an Encore Fellow and increased foundation grants by 300%, including a $2 million grant.

The Japanese American Cultural and Community Center (JACCC) is a legacy organization and a key focal point for the Little Tokyo community in Los Angeles. Across its 40-year history, it has served as a galvanizing location for community programs as well as an arts organization that teaches and celebrates traditional and modern Japanese culture.

Recently retired and seeking her next challenge, Emily Bernhardt realized she was not ready to stop working as she ”needed to keep her brain exercised.” Assessing her interests and skills, she realized she was a perfect “interim” person, adept at converting organizations to a new and different vision, and in instigating change. She wanted to work in a non-profit where she could give back to her community.  She learned about Encore Fellowships and realized it was the perfect “soft landing” for the recently retired.  Upon seeing her application,  Patricia Wyatt, CEO and President of the Japanese American Cultural and Community Center (JACCC) recognized that she was a perfect fit for a new visionary financial leader. Interestingly, Emily had worked with the JACCC as a client at her first accounting firm position.

Emily restructured and revamped all processes, systems, reports, and analytics so that Pat had a granular view into the organization and its programs’ strengths and shortcomings. She created financial reports that told stories and focused management efforts on areas that were catalysts to growth.  She worked with grant-writers to help them interpret the financial stories and historical information to create powerful proposals to grant organizations.

“Because these grant organizations could see that JACCC had a deep understanding of its financials and budget, they had confidence in the ability of JACCC to translate vision into effective programs that thrive,” Patricia explains. Emily’s efforts resulted in a 300% increase in foundation grants including a $2 million grant (the highest amount awarded from a consortium of foundations, The LA Arts Recovery Fund). In addition, JACCC was named as one of America’s cultural treasures by the Ford Foundation.

In addition to her successful financial insights and restructuring, Emily enjoyed the intergenerational aspects of working for a non-profit. “Pat’s team is a lovely mix of employees, some new and passionate, others more seasoned with a wealth of history.  Seasoned workers benefit from seeing new ways to view and understand data, as well as learning so much about social media and the internet from younger team members. The young and less experienced benefit from new perspectives.

Emily recently accepted the position of CFO at JACCC.  Pat states “Emily is an example of the catalytic impact a Fellow can have.”

Stay up to date with the latest Encore.org news, resources and opportunities. Sign up here.